You are here: Home / Archives for Samsung 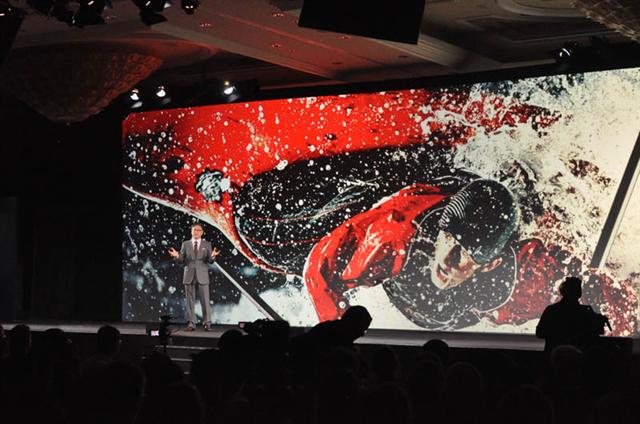 <February 1, 2012> Samsung Electronics Company, Ltd., the world’s largest provider of televisions, wow’d the crowd at CES last month with a stunning display of 55-inch OLED flat panel televisions. Kicking off the show on press day with far-and-away the largest standing-room-only press conference of the day, Samsung showed again why they lead the field with a major commitment to a new technology – OLED. END_OF_DOCUMENT_TOKEN_TO_BE_REPLACED

<January 18, 2012> The day before the International Consumer Electronics Show opens, the show promoter holds something they call “Press Day.” Press Day is a mind-numbing endurance test of the media’s stamina with back-to-back-to-back-to-etc. press conferences. Each press conference is supposed to be 45-minutes long to give the press 15-minutes to move to the next one. END_OF_DOCUMENT_TOKEN_TO_BE_REPLACED

<January 18, 2012> CES Press Day kicked off this year with LG who seemed anxious to update the media on their progress in 2011. Wayne Park, President and CEO of LG USA, told reporters that although 2011 was a tough year economically, LG’s revenues were up 8 percent. Park also told the group that LG had a record-breaking fourth quarter in U.S. sales. END_OF_DOCUMENT_TOKEN_TO_BE_REPLACED Sony Corp. has decided to pull out of its joint venture with Samsung called S-LCD Corp. Launched in 2004, the JV manufactured LCD TVs in South Korea for both partners and was Sony’s attempt to catch up with the rest of the industry after its disastrous decision to stay with analog sets as everyone else turned to flat panels. END_OF_DOCUMENT_TOKEN_TO_BE_REPLACED