You are here: Home / Archives for Spotify

Tidal, the musician-owned music streaming service put together by rapper Jay Z, announced this week that it has sold a third of the company to telecom giant Sprint. Although the original announcement did not disclose the price, Billboard, the music industry trade journal, said that Sprint invested $200 million for a 33% stake in the company.

If I were Jay Z’s publicist, I’d be nervous right now. The popular rapper’s reputation as a savvy businessman is in serious jeopardy. Billboard, one of the oldest and most prominent music industry publications, has recently launched a new annual survey of the top “A-list music business professionals.” In order to capture their honest opinions, the survey is conducted on an anonymous basis. While not exceptionally detailed or deep, the survey is meant to cover a “broad range of temperature-taking topics.”

The results of this inaugural effort offered some surprises – including the fact that more than 7 out of 10 of these top music industry executives predict that the Tidal music streaming service won’t survive its first year – a remarkable no-confidence vote in Jay Z, Tidal’s owner.

Tidal Music Service has, for the second time in only a matter of months, dismissed its CEO. According to a report in the Wall Street Journal, Tidal has dismissed interim chief executive Peter Tonstad who held the position for only about three months. In a statement, they thanked Tonstad for his service.

Just days after Apple, Inc. announced its plans to attempt to reassert its leading role in the music distribution and streaming businesses, we learn from the New York Times that two powerful state attorneys general in New York and Connecticut have launched an investigation into Apple’s music licensing practices. The purpose of the investigation is to determine if Apple has broken any antitrust laws in cutting deals that allegedly restrict music industry providers from offering their content on a free basis with other services.

Soon to Face New Competitor in Service Created by Apple and Beats by Dr. Dre

The narrative surrounding Tidal, the latest music streaming service to enter the increasingly crowded music delivery market last year, has taken a new and unforeseen turn with the purchase of the service by Jay Z. Originally conceived as a pay music streaming service offering a higher performance alternative to the ad-driven free services of highly compressed music streamers such as Pandora and Spotify, the Tidal narrative was one of quality. Now?

See more on our thoughts on this dramatic new development… END_OF_DOCUMENT_TOKEN_TO_BE_REPLACED

Spotify, the popular music sharing app, announced today that it will offer streamed music to smartphones for free (ad-supported), starting today. Spotify has long offered this capability on desktop computers for free (again supported by advertising), but had required a paid subscription (ad free) for mobile devices. Now…everything changes.

The company also announced that it has exclusively licensed the rights to stream music from rock icons Led Zeppelin…also starting today. 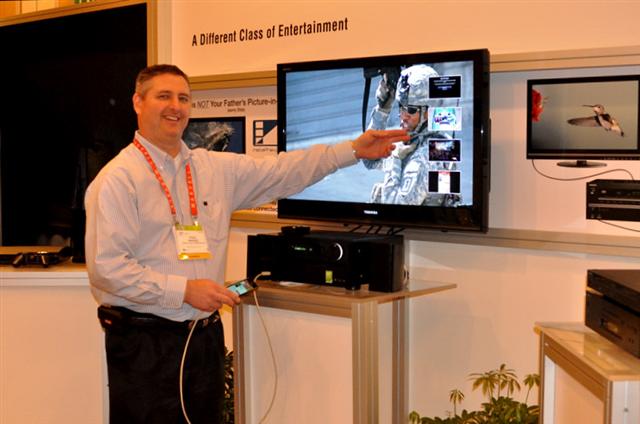 <January 25, 2012> Onkyo Corporation had a very busy CES, not just because of the recent news of their strategic partnership with Gibson Guitar (and subsequent to CES, a partnership with Teac), but because the company was showing and demonstrating new technologies recently announced that will enhance their soon-to-be-released receiver line up. Paul Wasek, Onkyo National Marketing and Product Planning Manager, took the ALERT around the Onkyo booth to show and demonstrate these technologies. END_OF_DOCUMENT_TOKEN_TO_BE_REPLACED

Last Friday, Strata-gee broke the news that both Cheena Srinivasan and Michael … END_OF_DOCUMENT_TOKEN_TO_BE_REPLACED