You are here: Home / Archives for Toshiba 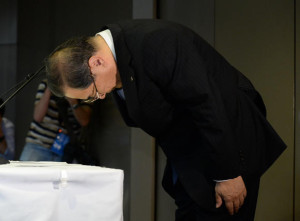 On Monday, Toshiba released their twice-delayed final financial data for the last fiscal year (ended March 2015) in what it undoubtedly hoped would be the first step to turning the page from a scandal-racked year. But forces out of their control conspire to keep them in the hot seat – with a regulatory agency threatening large fines and a major shareholder demanding the company sue its former executives.

10 New Investigations into Allegations of Improprieties, Including at U.S. Subsidiary

Just when you thought things couldn’t get worse for the aging Japanese industrial giant, Toshiba Corp. again stunned the financial community in Japan – forced to postpone their already delayed financial reports which were expected at the end of August. The company said it was forced to delay the report in the face of ten whistleblowers who have come forward alleging more company misdeeds. The company has launched ten new investigations, including one at a U.S. subsidiary. 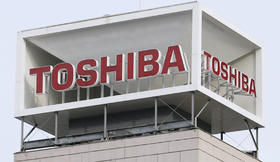 Toshiba Corp. has been subjected to almost daily press stories and analyses in the Japanese media on their continued struggles in the wake of a huge accounting scandal at the formerly blue-chip powerhouse company. The scandal was likely large in terms of financial losses, but even larger in terms of decimating the reputation of the company and its management. To turn the situation around, the company must start to build a new reputation for reliability. It isn’t going to be easy…

Much as we anticipated in our report yesterday, at a press conference today in Tokyo, Toshiba President Hisao Tanaka has resigned from the company as a result of a broiling accounting scandal in which investigators say company bosses were involved in improperly inflating company profits. Vice Chairman, and Tanaka’s predecessor, Norio Sasaki and adviser Atsutoshi Nishida have also resigned in a startling confirmation of the severity of the crimes, as these executives are some of the most powerful individuals running the company up to now.

The Japan Times is reporting today that investigators looking into potential accounting malfeasance at Toshiba Corp. for the five-year period ending March 31, 2015 have released summary findings that confirms that the company management was directly involved in misreporting profits. The news exploded in Japan, as one of its most venerated companies has lost all credibility.

The company has scheduled a press conference for Tuesday in which it is widely anticipated that Toshiba’s President Hisao Tanaka will resign.

But the damage to the company, doesn’t end with Tanaka…see more… END_OF_DOCUMENT_TOKEN_TO_BE_REPLACED

Reports Say CEO is Out; Board of Directors Faces Massive Overhaul

When Japan Prime Minister Shinzo Abe announced an initiative to tighten up corporate oversight he couldn’t possibly have known that his administration’s first catch might be his biggest – Toshiba Corp. Toshiba, one of the largest and most respected companies in Japan, is being investigated for what many sources are calling one of Japan’s worst accounting scandals.

See what is coming for this titan of Japanese industry… END_OF_DOCUMENT_TOKEN_TO_BE_REPLACED

Last month, Toshiba Corp. warned the financial markets in Japan that they were launching an internal investigation into “possible problems” with its accounting. The stock exchange’s reaction to the announcement was swift, with the company’s stock price having its biggest one-day drop in value in more than a year. Now unnamed sources are telling the media that the company will have to restate its profits…for a three-year period.

See how hard Toshiba’s profits will be hit… END_OF_DOCUMENT_TOKEN_TO_BE_REPLACED

Two separate announcements this week add significant momentum to a rapidly growing market we first told you about three years ago – the residential energy storage market. Now, two new announcements – one from Toshiba in Japan, and the other from home-grown Tesla, dramatically reveal the increasing interest in this all-new market for residential energy storage devices.