You are here: Home / Archives for Brian Dunn

Why, after so much effort, is Schulze considering dropping his bid?…See what we discovered… END_OF_DOCUMENT_TOKEN_TO_BE_REPLACED

With these departures, Best Buy’s board now has four vacancies… END_OF_DOCUMENT_TOKEN_TO_BE_REPLACED 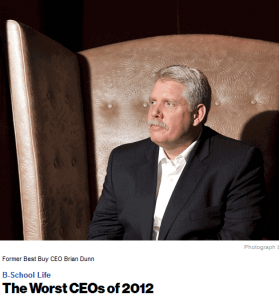 How bad is it at Best Buy? They had to pay someone $32 MILLION to come run it!… END_OF_DOCUMENT_TOKEN_TO_BE_REPLACED

that the board investigation into the unseemly Brian Dunn affair has taken an unexpected turn, resulting in Best Buy founder and board chairman Richard Schulze being forced out of his own company. And yet, some market analysts are celebrating. Why? END_OF_DOCUMENT_TOKEN_TO_BE_REPLACED 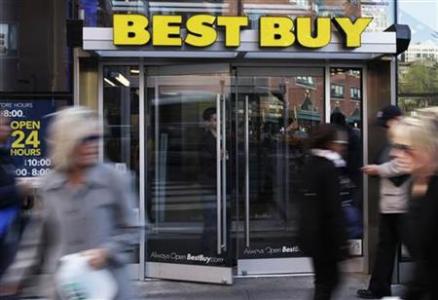 <April 11, 2012> Best Buy Company’s abrupt announcement on Tuesday morning that CEO Brian Dunn, a 28-year veteran of the nation’s top electronics retailer, was leaving the company effective immediately, caught industry and financial analysts by surprise. No one saw it coming although in view of Best Buy’s dismal financial performance, the company’s explanation that it needed new leadership to forge a new strategic direction for the company seemed to ring true. END_OF_DOCUMENT_TOKEN_TO_BE_REPLACED