You are here: Home / Associations / CEDIA Releases New Market Data It Says is Even More Accurate

At last week’s CEDIA Expo show in Indianapolis, IN, the trade group released select market data from their second annual survey called the Size and Scope of the Residential Electronic Systems Market in the US 2012. Although compiled and released this year, the data is actually from 2011 and is a follow-up to the same report they excerpted last year for 2010.


According to Erica Shonkwiler, CEDIA’s manager of market research, this year the organization had a substantial 41%  increase in the number of qualified respondents to their survey and – thanks to this larger sample size – there is less margin of error and overall a more accurate result. Shonkwiler said that in fact, CEDIA had 770 qualified contractors participate in the survey – and although she didn’t reveal the number of participants last year, it was apparently substantially less.

CEDIA decided to go ahead and release some of the preliminary or key findings from the first phase of the project which was completed between June-to-August of this year. There is a second phase in which manufacturers and suppliers are providing more details and they expect to release more data in the fourth quarter of this year.

CEDIA had five major goals for this research, which were:

The types of dealers that participated in the survey were broken down as follows:

CEDIA says that, when taking margin-of-error (MOE) into account, the share of the market in terms of type of dealer remains about equal with last year’s survey. However, ESCs may be taking a slightly larger share of the revenue pie.

CEDIA’s market research department also bravely waded into the murky waters of forecasting growth with interesting results. All types of installing dealers are projected to grow this year with the only exception of security installation firms which are expected to see revenues decline 4% from $2.3B to $2.2B.

The big gainer in terms of percentage of growth is the Electrical Contractor dealer type which will see a double digit increase from revenues of $600 million in 2011 to $700 million this year. But ESCs retain their Mack Daddy position in overall dollars with this segment expected to hit $8.7B or 5% over last year’s $8.3B.

CEDIA installers are an optimistic bunch…

Shonkwiler said that the survey showed that respondents were expecting a much better year in 2012. According to the survey, respondents expect the number of completed projects to increase this year with ESCs forecasting a 20% increase in the number of total installations.

Not only that, but survey respondents say that they average project size will increase this year as well. Other than Security Installation Firms who expect flat project sizes, ESCs project 18% growth in project size, Electrical Contractors project an 80% (!) increase in project size, and IT Pros also expect an increase (amount not specified).

Dealers all report that they plan to increase the product categories that they serve as a method of driving their revenues. Dealers appear committed to drive sales with a big push for up-grades and add-ons…as well as seeking business with new customer types.

How big is retrofit? Survey respondents say that 73%-84% of all installations are now retrofit. CEDIA notes that as recently as 2007, this figure was more like 50/50.

Break the law of average…

However, what does not surprise me – but may surprise you – is the data on the typical dealers Total Gross Revenue. In the case of ESCs, the AVERAGE total revenue is $1,300,000. But I think the more accurate figure to use as a gauge is the MEDIAN revenue, which is the level at which half of the ESCs are above and half are below. In this case, the MEDIA gross revenue is $478,000.

Why do I prefer median over average? Simply put, when calculating an average, a few large ESCs skew the data higher than the pragmatic reality of most ESCs. However, the median calculation is not similarly swayed. 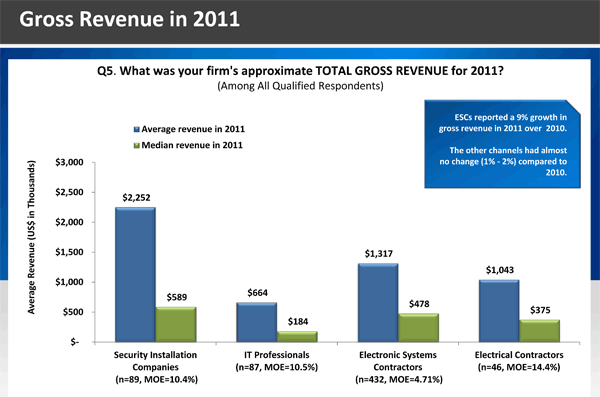 ESCs also report that their average project size or total revenue per installation last year was $28,000. The median installation was $10,000. And again, for both of these numbers, ESCs are projecting increases in 2012.

Interestingly, on the slide reporting the anticipated increase in revenue per installation by ESCs in the survey – even CEDIA had to point out that ESCs had made a similar optimistic forecast last year that they failed to achieve. As I said earlier, this is an optimistic bunch.

Finally, in a graphic showing the categories being addressed by ESCs, there was a remarkable spread in the types of products that they are installing. Frankly, this slide seems a little questionable as it conflicts with informal surveys of integrators we’ve done. For example, 38% of ESCs (not Security Installation Companies) report that they install Security (Alarm) System, 68% say they install IP Network Security Cameras, and 81% say they install Video Surveillance systems. 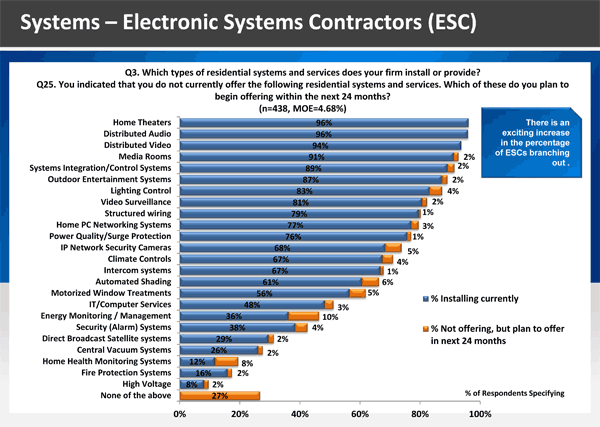 Can headphone design really be inspired by a rad-looking "supercar"? Apparently, … END_OF_DOCUMENT_TOKEN_TO_BE_REPLACED