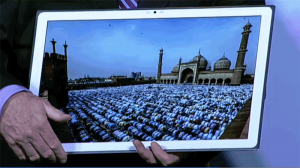 In new data released today by the Consumer Electronics Association, consumer adoption of one of the hottest technologies in tech today – tablet computers – actually (and unusually) slowed in the second quarter of 2013. This unexpected downturn comes after several consecutive quarters of growth for a product category that the CEA itself identifies as one of the two major drivers (along with smartphones) for the entire electronics industry.

What does this unexpected downturn mean?…

The new report released by the CEA is titled Consumer Outlook on Tablets, Q3 2013 and, while it notes the disturbing result for the second quarter, the report also suggests that this result may just be a temporary blip. The tablet category has become so big that the CEA closely follows the category separately and releases this report on the last Monday of each month following the close of a quarter.

CEA says its data indicates that 41%, or four in ten consumers, reported owning a tablet computer. This is about the same rate – about 40% – the trade group reported for consumer ownership at the end of the first quarter as well. Therefore, the rate of consumer adoption stalled in Q2 as compared with the first quarter.

However, the report also looks at what market researchers call “purchase intention” and on this front the report sounds a more hopeful note. According to the study, another 40% of survey respondents said that they planned to purchase a tablet sometime within the next two years. This reading of purchase intention is 33% more than the number of consumers who said this in March.

Even more encouraging, 72% of consumers – almost three out of four – said they would buy a tablet sometime in the future.

“Tablets faced a relatively stagnant second quarter in 2013, after several consecutive quarters of strong growth,” said Kevin Tillman, senior research analyst, market research, CEA in a prepared statement. “However, an increase in consumers’ purchase intent indicates optimism. Many consumers are waiting for the next generation of models to upgrade their existing devices.”

The top fives uses of tablets:

Just how big is the tablet market in the U.S.? According to updated projections released by the CEA this month, the industry will ship 87.1 million tablets by the end of 2013. This is a 45% increase over 2012. And tablet market revenues are projected to grow by 9% to come in at an impressive $27.3 billion.

For more information on the consumer electronics market, see: www.ce.org.