You are here: Home / Archives for Peter Tribeman 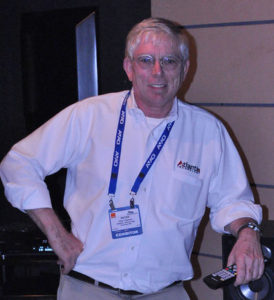 We have confirmed that Peter Tribeman, one of the founding partners and long time President of Atlantic Technology International, will leave the company at the end of this month. It is the end of a 28-year career there and, as we’ve learned, has been in the works for about eighteen months.

Atlantic Technology announced this week that it is launching a new line of home theater and music speakers, including a unique product they call a “front-stage” speaker which resembles a traditional soundbar, but is passive. All models are based on the same drivers, so that whether used separately or together, the sound is fully timber-matched for consistent imaging and sound quality.

See more on these new models from Atlantic Technology… END_OF_DOCUMENT_TOKEN_TO_BE_REPLACED

One of the bigger stories in our industry is Dolby Labs introduction of a new surround sound system they call Dolby Atmos. Launched at CE Week in New York City this past June, Atmos has already attracted a number of predominantly electronics manufacturers supporting the system in their latest models. Now the selection of Atmos products expands with new product introductions by both Triad Speakers and Atlantic Technology.