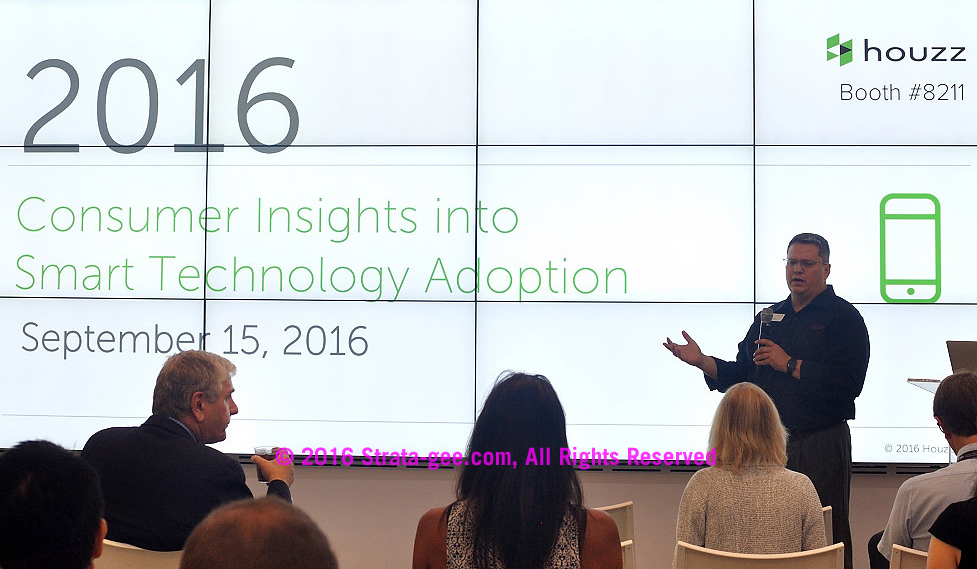 Being the marketers that we are, when we heard that Houzz was going to present the results of their first ever Smart Home Trends Study at CEDIA 2016, well we put that on our schedule. At the appointed hour, we listened closely as Liza Hausman, Houzz’s Vice President of Industry Marketing and Dave Pedigo from CEDIA patiently went through and explained the results – and while the results were unremarkable, they were interesting nonetheless. And, there were a couple of surprises.

See details on what the results from the Houzz study were…

Houzz bills itself as the largest website, platform and app for the home building, remodeling, and design industries. According to Liza Hausman, Houzz gets more than 40 million monthly users. (That’s just slightly more than we get here at Strata-gee!)

Houzz, which has a program in which custom integrators can pay a fee to be listed on their website to receive leads for potential jobs, displayed at this year’s CEDIA. And in that capacity, they partnered with CEDIA to present the results of their first ever Smart Home Trends Study. According to Hausman, they hope to continue with the survey in future years to elicit more trends.

For survey participants, Houzz defined a smart home as one with two or more smart devices. And a system or device has smart capabilities if it can be monitored and/or be controlled by a mobile device or computer.

The first slide Hausman popped up noted that when remodeling their homes, 55% were installing non-smart device. Another 45% of respondents said they were choosing smart devices. Because this is the first such survey, we have no basis of comparison – but we’d bet if this study was done five years ago, the number installing smart devices would be significantly smaller.

According to the study, Hausman says, homes are becoming more connected…and smarter.

What Homeowners Say Their Smart Home Priorities Are

Maybe the biggest surprise for us was how homeowners ranked their priorities for smart home upgrades: #1 was Lighting; #2 was Climate Control; #3 was Security/Safety; and last, #4 was Entertainment. Fully nine out of ten participants said their projects were Lighting projects. About half of that number (46%) said their project was for an Entertainment upgrade.

However, when looking at those categories in terms of those opting to install smart devices, the order changes completely: #1 is Security/Safety (25%); #2 is Entertainment (18%); #3 is Climate Control (14%); and last place is #4 Lighting (12%). So for those choosing smart home upgrades, entertainment moves up the list.

Entertainment Systems Projects – How Many are Smart?

In looking at environmental systems, a full 30% of participants said they chose to install a new thermostat or other temperature controller. Of this number 12% chose a smart device, while 18% opted for a non-smart version. Only 7% of respondents said they were installing motorized blinds or shades. Of of this bunch, only 2% selected a smart version.

Why Did They Choose Smart Entertainment Devices?

The study participants who indicated they executed or planned entertainment system renovations where asked to identify the reasons for choosing smart versions. An impressive 80% said it was to “Improve the entertainment experience.” This was followed by 55% who said they wanted to “Improve my comfort or the comfort of my family.” Only 27% said it was because they wanted the latest technology. And, surprisingly, only 17% said they added a smart entertainment device for the “Ability to monitor or control from anywhere” – even though this is a widely pitched feature of smart devices.

We see a similar situation when participants are asked why they chose a smart thermostat installation. In this case, 71% said it was to “Improve my comfort or the comfort of my family;” 68% said it was to “Reduce energy consumption.” And while 41% identified the “Ability to monitor or control when away,” only 20% said their choice was for the “Ability to monitor or control from anywhere.”

We’re not sure why respondents aren’t identifying what our industry believes is one of the key benefits to smart technologies (remote monitoring and control), but we saw it over and over in the study results. So I guess we can say that this was a bit of a surprising result.

Who is the Most Satisfied with their Smart Device Upgrade?

How Much Did Consumer Say They Spent on Their Entertainment Project

For those opting to stick with non-smart devices, Houzz asked them to describe the barriers to adopting smart devices. The top three responses are enlightening: “Just not interested” (37%); “Too expensive/pricey” (31%); and “Concerns about privacy” (23%). Reason #3 caught our attention – as our industry plunges headlong into the world of IoT, privacy is likely to become a significant challenge for consumers.

The slide that Houzz used to show this for the entertainment category was titled, “Greater DIY in Entertainment Installation.” Indeed…

CEDIA members are invited to download a copy of the Houzz study at: info.houzz.com/SmartHomeTrends.

A Fluke? Or is Housing Making a Comeback? Data released on Friday by the U.S. … END_OF_DOCUMENT_TOKEN_TO_BE_REPLACED