You are here: Home / Management / Don’t Throw the Baby Out with the Bathwater 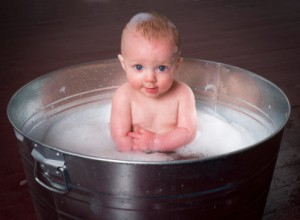 As a marketing strategist, I am often asked to help clients come up with promotional ideas. Consumer electronics can be a very promotion-driven business, so this is a common task for tech marketers. There are no “hard and fast” rules and often I will brainstorm with the client, his/her team, or outside contractors I often work with.

But no matter what kind of idea we come up with, I try very hard to avoid something that is a bit of a common practice in the technology business – promotions that “throw the baby out with the bathwater!”

What does this mean? See an example of how marketers throw the baby out with the bathwater…

In perusing my inbox Thursday morning, I received a promotional email from NewEgg, one of the more aggressive promoters. NewEgg has specials every day…and I enjoy getting their promotions as they generally cover a wide range of products from computer components…to small appliances. This morning, one NewEgg special in particular caught my eye as it featured a product widely used in our industry – HDMI cables.

As many of you know, the cable industry has been going through some exciting – and some wrenching – changes over the last few years.  Not long ago, most brands either manufactured their cables – or more likely contracted for the manufacture of their cables – from companies here in the U.S. However, as China began its growth into a low-cost industrial powerhouse, it wasn’t long before they began manufacturing cables as well.

Soon, just about every cable brand switched to buying cables from a handful of large cable manufacturers in China, and then stamping their brand name on the product for marketing here in the U.S. This development had positive and negative consequences.

On the plus side, lower labor costs resulted in dramatically lower prices making cables more affordable than ever. On the minus side, it became increasingly difficult to differentiate your brand from all of the others which likely came out of the same factory.

HDMI became the chosen connectivity standard for HDTV and soon everybody was selling HDMI cables. But HDMI was problematical. To get decent performance, the cables were very thick and heavy. The standard connector was large and heavy as well. Many dealers and installers complained about cables literally pulling out of the back of units they were plugged in to.

One solution was offered by a company called RedMere. Utilizing an active design, HDMI cables using RedMere technology were substantially smaller, thinner, and much lighter. This thinner, lighter cable was a powerful differentiator (Monster was an early adopter of RedMere’s technology), and RedMere powered cables were more expensive than your typical, run-of-the-mill HDMI cable.

So – back to my inbox – as I scanned my email, one special caught my eye immediately – a FREE HDMI cable! FREE…tough to beat that price! As I am firmly of the belief that there is no such thing as a free lunch…and as an interested tech marketer…I looked a little more closely at the NewEgg deal.

The first thing that I noticed in the fine print – and it was a surprise – this is not some low-end piece of junk cable that will die in 90-days. No, NewEgg was offering a 10-foot long RedMere powered HDMI cable…for FREE.

As I dug a little deeper, I saw some interesting facts. The cable brand is listed as Rosewill. This is NewEgg’s private-label, in-house brand that they use on a variety of generally promotional items. Normally, it sells for $19.99 with free shipping – but in this special the cable’s free but there’s an added $1.99 shipping charge. Interestingly, just above it on the page is a 24-inch ASUS computer monitor at a pretty fantastic price ($149)…WITH free shipping. A highly discounted but big, heavy monitor ships for free…while a small, thin, and light HDMI cable costs $1.99 to ship?

Also noteworthy, right under the word FREE, but in smaller type, is the phrase “After $19.99 MIR.” While MIR may sound like a Russian space station, it actually stands for Mail In Rebate.

So there you are – NewEgg’s revenue (& profit?) is from the $1.99 shipping fee on every cable shipped…AND what is known as the “breakage” rate. The breakage rate refers to the rate at which people purchase the cable but don’t send in the rebate form as a percentage of the total overall number of people who buy the cable.

Breakage happens more than you might suspect. People forget to send the form in, or they lose the form, or they are just too lazy to go through the steps to get a rebate back in the mail. Even if they do mail in the form, the processing time allows the marketer a “float” where they can use or invest the upfront funds for some period of time before they issue the actual check for the rebate. But mainly, the marketer on this type of promotion hopes you won’t mail in the rebate form and fall into the breakage category.

The beauty of breakage…

For example, consider popular social couponing site Groupon. Groupon users, who obtain coupons for products/services at deep discount…pay up front for them. And they have, in some cases, laid out a substantial amount of cash. One would assume a low breakage rate. But according to this article about Groupon, the company says it has a 30% breakage rate…30%!

Groupon’s high breakage rate results in more revenue/profit for the dealer, as the upfront revenue from paid coupons are not redeemed on the back end with costly goods/services. Typically, the richer the deal, the greater number who do submit the forms for redemption – and the lower the breakage rate (and revenue/profit).

Throwing the baby out with the bathwater…

Now, generally, I don’t recommend clients give away higher end/higher quality/higher technology, differentiated high-performance products. Promotions of this nature are really just throwing the baby out with the bath water. The unintended side-effect of a promo like this is that it tends to devalue the Redmere technology. Later, when you are NOT running a promotion, and you want people to step up to a higher price point – you want them to perceive technology like Redmere’s as valuable. But giving it away for free makes it look like it’s really of no value.

However, there is a lot we don’t know about the reasons for this particular deal by NewEgg. Perhaps this is a clearance item and there is a newer/better product coming out to replace this one. Or perhaps NewEgg is using this as the electronic equivalent of a “door buster” in the hopes attracting a rush of buyers who will purchase lots of add-on items to their orders.

The expression “don’t throw out the baby with the bathwater” means you don’t want to throw out something of value (the baby) when you are in the process of disposing of the (presumably dirty) bathwater, which has no value. Or, in this case, don’t devalue the Redmere technology for the purpose of running a special on the HDMI cables you’re trying to get rid of.

So think very carefully about your future promotions. You don’t want to throw the baby out with the bathwater!

A Fluke? Or is Housing Making a Comeback? Data released on Friday by the U.S. … END_OF_DOCUMENT_TOKEN_TO_BE_REPLACED