You are here: Home / Economic Trends / Are You Using These Best ‘Tough Economy’ Marketing Practices of Top-Performing SMBs? 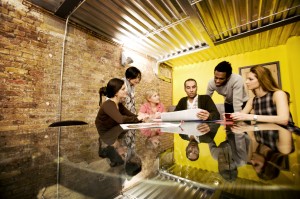 How are top-performing small-to-medium sized businesses (SMBs) adjusting their marketing for the current sluggish economic climate? Act-On Software, a marketing automation software company, commissioned Forrester Consulting to find out by probing hundreds of SMBs in an effort to learn more about their marketing practices – especially in regards to tactics employed in response to the recent economic morass within which we all find ourselves. A few months ago, Forrester and Act-On released excerpts from the research titled Driving SMB Revenue in a Tough Economy – excerpts that revealed several interesting insights into the differences between the marketing practices of top-performing companies as contrasted to overall results…or those of bottom-performing companies.

There are some interesting insights from what they discovered…

To conduct the research, Forrester surveyed top marketing executives from 208 SMBs – which are defined as businesses employing between 50-2,499 employees. The survey specifically required responses from executives or employees with direct responsibility for marketing strategy and budgets.

Almost half (48%) of the companies surveyed employed between 50-249 employees, so results do slightly skew to the small side of the SMB definition. The survey was launched in August 2012 and completed by the end of September. An excerpt was released late November 2012 from which this post is mostly taken.

A wide range of industries were represented by the survey respondents, including consumer electronics. However, there was no representation of retailers and the bulk of the respondents (47%) came from professional service companies.

Forrester asked these companies, a cross-section of the economy, about their perceptions of online marketing, market planning and programs, organization and process, and technologies used to manage online marketing. Respondents were also asked to “validate the benefits and realized gains from their investments in online marketing.”

Learn online, and your business will benefit…

According to Forrester, those SMBs who have adopted online marketing practices have “realized significant business benefits, ranging from improved campaign performance to higher returns on marketing investment (ROMI).”

But we couldn’t help but notice that there was a high correlation between Forrester’s findings across all industries, and those with which we are directly familiar in the consumer electronics and custom integration businesses. Most notably:

SMBs, in general, are more aggressive marketers than their large enterprise counterparts. This reality is indicated by the fact that most small businesses spend a higher percentage of their revenues on marketing than large companies. Large companies generally spend about 2% of their revenues on marketing. But according to this survey, SMBs were generally spending well over this 2% level. However, the bottom-performers are very heavily weighted in the “less than 2%” and the “2%-4%” ranges.

Ironically, most SMBs are still heavily oriented towards “high-touch” traditional marketing methods. More so than their large enterprise colleagues, SMBs favor those marketing methods with direct touch to the customer such as personal relationships/networking, tradeshows/industry events, in-person events, etc. And it was these largely traditional methods that SMBs also mentioned most when asked to say which marketing techniques were delivering results.

Our experience in CE and CI tracks this survey’s result. Many sales-oriented organizations, whether sales representative firms, distribution companies, or sales-oriented small manufacturers focus almost exclusively on interpersonal interaction as their primary “marketing” tactic. However, these high-touch methods do not scale very easily…or very cost effectively. Is there a missed opportunity here? 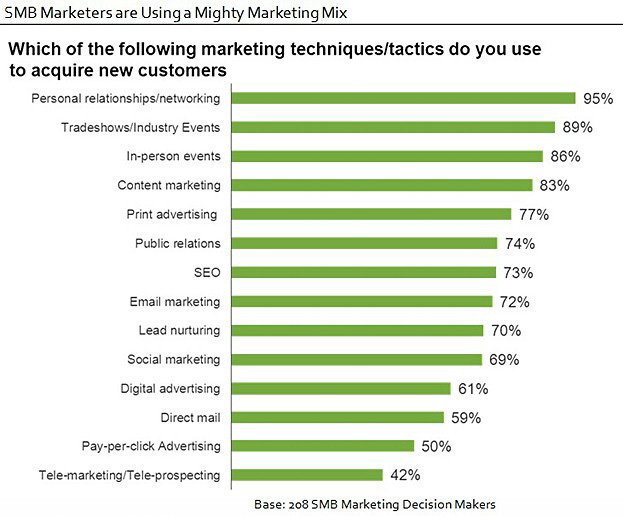 In large enterprises, it is quite common to engage separate teams of specialists for each of the various categories (i.e. digital marketing teams, print advertising teams, social media squads, etc.) SMBs tend to utilize the same team who are then charged with driving all of the organization’s marketing activities.

SMBs are experimenting with, but not necessarily embracing, social media as a fundamental part of their marketing efforts. While various social media (social “marketing” in this survey) tactics are being employed by SMBs, in general they were not highly rated. While 69% of SMBs ranked it as a marketing tactic used, it was well below many other more popular options.

Forrester noted in their analysis that large enterprises seem to have moved much more aggressively into enhancing their marketing and branding efforts via various social media venues. But SMBs are moving slowly. In the chart below, for example, you will notice that the percentage of SMBs employing a given social media tactic and rating it “don’t know if its working” is often as high or higher than those saying they will “increase usage.” 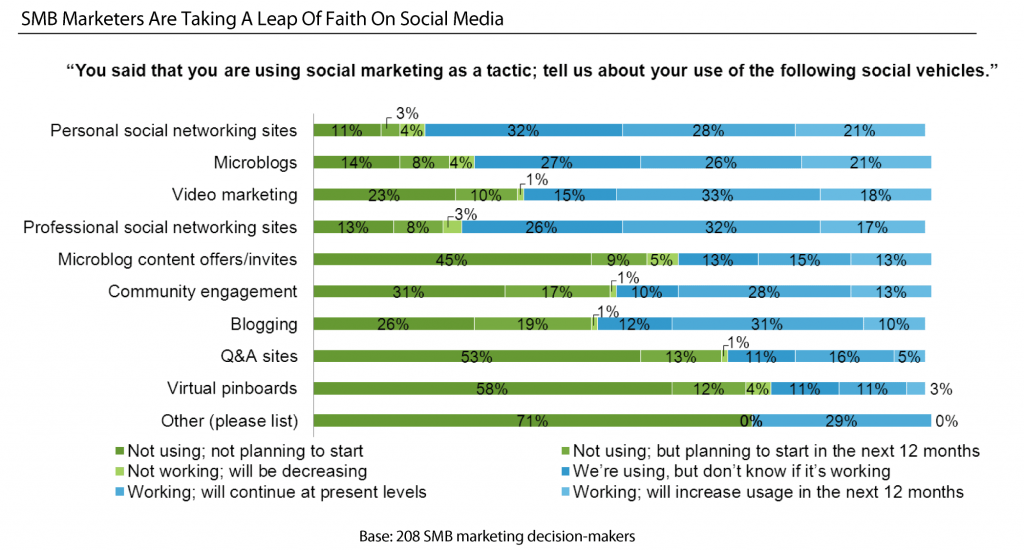 Forrester posited that the ambivalence towards social media by SMBs was likely due to the “perceived inability to measure the impact of social media” on their overall marketing efforts. We disagree. In our view, most SMBs have failed to construct effective social media integration into their overall marketing campaigns. This is probably because of confusion of the role that social media could/should play in marketing, than in the ability to generate measurable results. As a result, its hard to gauge the impact of a tactic when you aren’t sure of its role.

To learn more about this study, see Act-On Software here…