The CEDIA Expo is next week and our annual CEDIA Survey is now closed for responses. Thank you all who participated – we truly appreciate those of you who took the time to respond. Results are in and we have to say, just when we think there are no surprises left…we get surprised again.

But first…my usual admonitions about this survey. As hard as we try to encourage participation in the CEDIA Expo Survey, it is still a relatively small sample. Therefore, you should take these results with a hearty grain of salt. This is especially true if you try to compare with previous years where the number of participants varies from year-to-year.

And this positive bias can be especially acute for those companies attending who are also displaying. Either consciously or subconsciously, when someone is spending the money to display at an event like this – they tend to want to be even more positive to help encourage others to attend as well.

And finally, the results tend to be influenced by the make-up of Strata-gee.com readers. While Strata-gee.com readers are obviously an intelligent lot – they scarcely represent an accurate cross-section of all of America. Our readership is also heavily skewed toward management and upper management in their companies which could also color their responses.

All that being said, there were some interesting outcomes this year. First…and this is truly disappointing for us…the number of participants in this year’s survey dropped by 30% – a substantial amount. This is true even though we pursued our typical promotional efforts, heavily weighted toward a social media full-court press.

We can’t say with certainty whether our drop off in participation represents a decline in interest in and/or participation in the CEDIA Expo itself – that remains to be seen. But anecdotally over the last couple of weeks we have been told by multiple sources that there are fewer exhibitors this year…and even fewer press attending the event. (This may explain why I’m getting hounded like never before this year by PR people wanting to schedule interviews with Strata-gee.com.)

And while we’re on the topic of disappointment over participation, we were really discouraged to see the number of retailers-integrators-installers who participated this year had also dropped dramatically. Last year, almost 13% of all survey respondents were either a retailer, or an installer, or an integrator. This year, that number dropped to only about 4%. We can’t explain the dramatic drop-off in dealer participation.

All that said, let’s review the results of this year’s survey. First up: 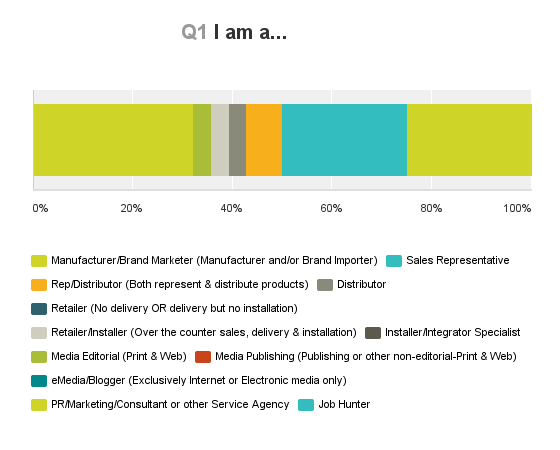 Our first question was for the respondent to identify just what type of business it is. We chose to represent the responses with this graph which we believe can help you graphically visualize their breakdown. Only one answer can be chosen to this question.

The next group of respondents was Rep/Distributor and so on down. Remember, Retailers and Installers came in at just about 4%. But the chart above allows you to easily visualize, for better or for worse, the breakdown of respondents.

Question 2: Will You Be Attending the CEDIA EXPO?…

When it comes to the question as to whether the survey respondent is planning to attend the Expo or not, we got the expected overwhelming “Yes” that we tend to get every year. This is to be expected, but the fluctuations up or down from year to year can be an interesting data point. 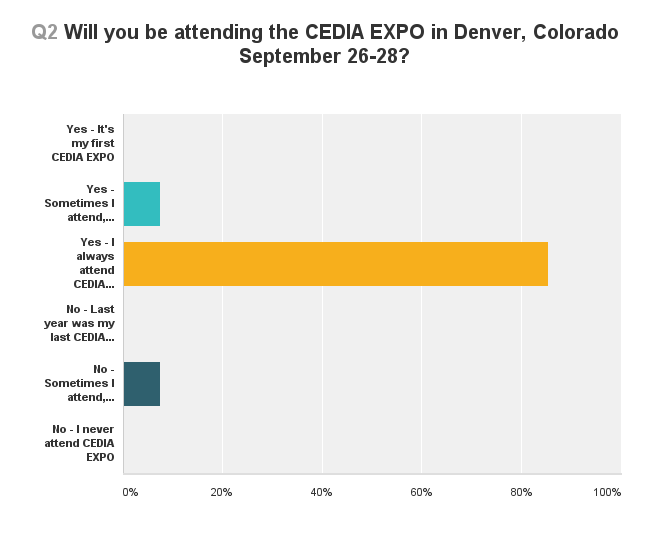 Again, we suspect that this is not necessarily an indicator of greater attendance at the show this year because of the improvement in percentage saying they are going. Rather, we believe it is somewhat anomalous based on fewer “no” participants this year.

In any event, one might fairly draw this as a positive conclusion…if in fact there are more attendees at next week’s show.

Question 3: Is Your Company Exhibiting with a Booth, Sound Room, or Other Display at the Expo?… 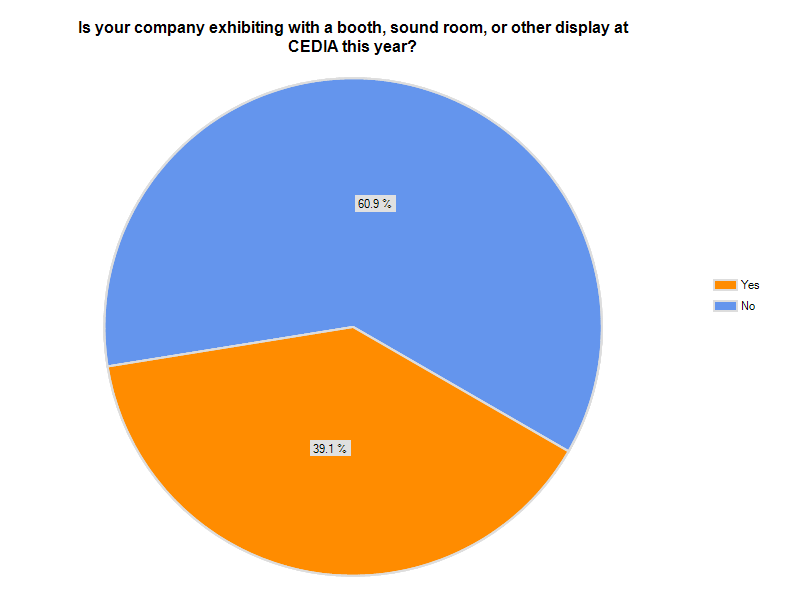 The results as you can clearly see in the pie chart above is that more than half of the respondent’s companies are not exhibiting. We did have a few write-in responses indicating that the respondent is participating in a booth of another company or client (i.e. like a sales rep working a manufacturer’s booth or a PR person working a client’s booth.) We also had one write-in saying that they have a suite at a nearby hotel.

Question 4: Why Will You Attend This Year’s CEDIA Expo?…

As usual, we sought to get a gauge of the reason why those who said they are attending will attend. For this question, multiple answers are acceptable as we want to get the full picture of the reasons they feel compelled to attend. 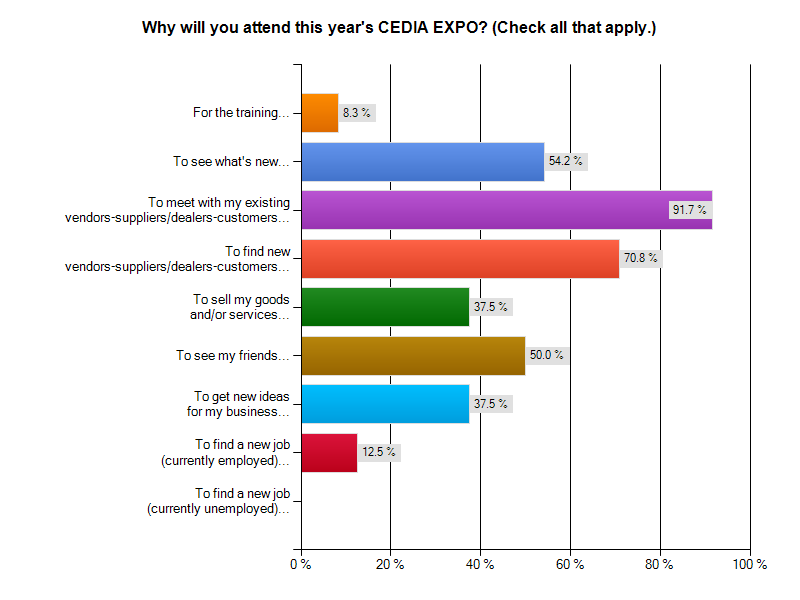 Question 5: If You are Not Attending, the Reason(s) Is(Are)…

We made a change this year and accepted multiple answers on this question…in the past, only one answer that best represented the reason for not attending could be selected. Perhaps for that reason, we had four major reasons instead of last year’s three. 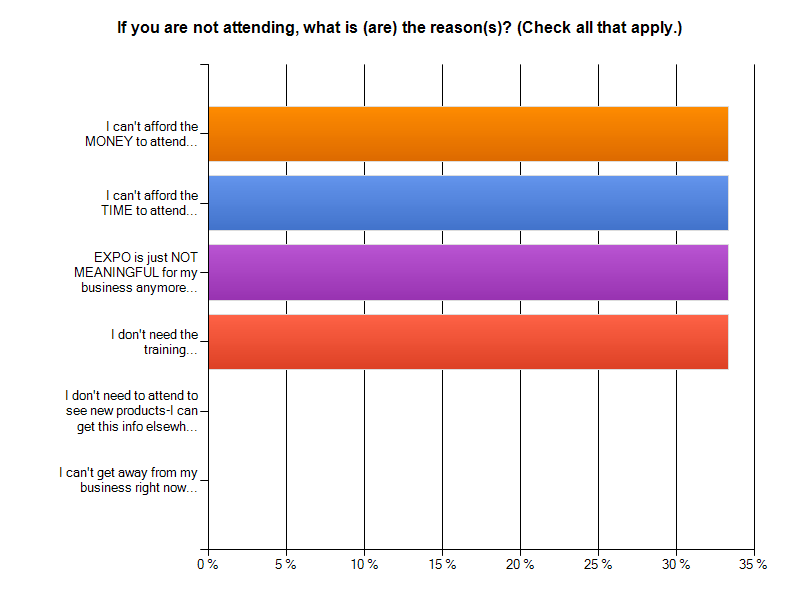 Even though different respondents selected different groups of answers, they all ended up at the same totals. Because of an inadvertent error, there was no ability to write-in other reasons this year.

Question 6: How Important is the CEDIA EXPO to Your Business and Why?…

The last two questions on the survey are open-ended text questions. This is my favorite because we get some creative responses. It also gives you an opportunity to really hear the voice of the respondent. As usual, we received a wide range of responses.

The substantial majority of respondents to this question said that CEDIA Expo is “very” or “extremely” important to their business. Comments included the following examples:

There were a few “middle of the road” responses…some with interesting implications. Following are some of the more interesting examples:

And, as always, there were those taking a more negative view of the event. Interestingly, several of the negatives – for the first time – mentioned show costs as becoming prohibitive. Samples include:

Question 7: Finish This Thought: CEDIA Expo Could Be Even More Important to Me and My Business If They Would…

Most of the survey respondents answered both of these last two questions. In the case of how CEDIA can make the Expo more important to respondents, some themes emerged including: stem attendance drop-off, change the location (a perennial complaint), cut the cost of attending, and more. Some of the more interesting examples are:

Again, we want to thank those of you who participated in the CEDIA Expo Survey from the bottom of our hearts. We’re all extremely busy these days and even though we took steps to make this survey as quick and easy as possible, it still takes time away from your other tasks to complete.

So that’s it for the 2013 Survey, such as it is. While it may not have attracted as many participants this year, we believe that there is some good and useful input here – for Strata-gee.com readers, CEDIA, and the industry.