You are here: Home / Tech Trends / Smart Appliances are Still Looking for a Home

New research shows that while a majority of internet users own some type of smart device, almost no one owns a smart appliance – even though many manufacturers like Samsung have been pushing the category for a couple of years now. If consumers believe in “smart” technology, what’s going on with smart appliances??

New research from Fluent LLC, a marketing company, conducted in January 2018 found that a majority of internet users (55%) say they own some form of a smart-home technology. In most cases, that means a smart TV (38%), followed by smart lighting (17%), thermostats (16%), and security systems (14%). But coming in on the bottom of their list with the lowest level of adoption was smart appliances – which only 7% of respondents said they owned, according to a report by eMarketer.

Smart appliances include connected refrigerators, stoves/ovens, dishwashers, and laundry equipment. Several appliance manufacturers are offering connected kitchen and laundry appliances – including the usual technology suspects Samsung and LG. But even some of the mainstream makers like Whirlpool, GE, Bosch, and others are dabbling in the category. Over the last two years, there has been more advertising and general push by the appliance industry, anxious to tap into the interest in smart home technologies to drive their business as well.

Digging a little deeper into the matter of why smart appliance adoption is still so low, last month, YouGov conducted a poll of U.S. consumers with interesting responses to questions about their thoughts on smart appliances. Fully 62% of survey respondents said they were “aware” of smart appliances – which in this survey included smart thermostats, not just kitchen appliances – but they said that they really don’t know much about them. 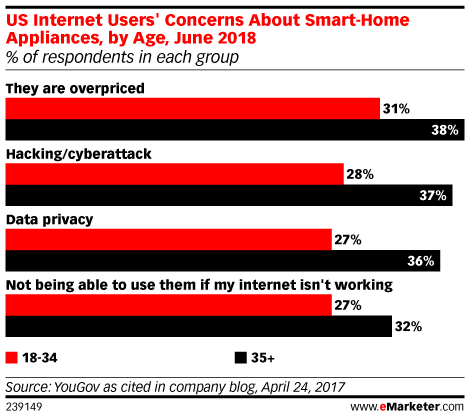 YouGov noted that there was a generational component to this: of those over 35 years of age, 67% reportedly said they don’t know much about these smart appliances. In the case of those aged 18-34, 52% said the same. While this is much lower for the younger generation, it still is a majority of them saying they are in the dark on the category.

Almost One in Ten Had Never Heard of Smart Appliances

However, more than a quarter of the younger demographic said they were both aware of smart appliances AND knew a lot about them. Overall, just under one in ten (9%) said they had never heard of the category.

YouGov went even further to try and determine the factors that are causing friction holding back adoption of smart appliances. Interestingly, the most prevalent response -31% of those 18-34…and 38% of those 35& up – said that smart appliances are overpriced.

But what could be a warning shot across the bow of the technology industry – almost as many (28% of 18-34; 37% of 35+) – pointed to fears of hacking & cyber attacks, and concerns over data privacy as the reasons for holding back on the category. And finally, respondents offered a more pragmatic objection, the concern over being prevented from using their appliance if the internet connection has dropped out (clearly a common experience by survey respondents).

In addition to these two surveys, eMarketer pointed to yet a third survey, conducted by researcher Crimson Hexagon – who scans social media comments to correlate general attitudes on a variety of topics. This survey notes a dramatic upturn in the amount of positive comments associated with the term “smart home.” In 2010, Crimson Hexagon noted that 60% of social media comments were of a positive nature. In 2017, that percentage jumped to an impressive 80% positive.

This study noted that adopters of smart home technology in their social media posts would use phrases like “energy efficiency,” “futuristic,” and “convenience” to describe it. But in an interesting and unexpected correlation with the YouGov survey, the negative comments tended to be almost identical to the other survey, including nothing high costs, privacy concerns, and potential for being hacked.

It truly is a new world!