You are here: Home / Consumer Trends / Study Shows People Value Their Data Over Their Car

After years of shocking privacy breaches and the more recent Facebook/Cambridge Analytica scandal, consumers are becoming more and more concerned about the security of their personal data. This attitude is reflected in new privacy research survey in which a majority of respondents said they viewed their personal data as more valuable to them than even their car.

See this surprising upgrade in consumer concerns about their personal data…


In an analysis by eMarketer about a recent survey by Radware titled, Consumer Sentiments: Cybersecurity, Personal Data and The Impact on Customer Loyalty, they note that a significant majority of consumers place the value of the security of their personal data to a higher degree than ever before. The survey asks a simple question: “Which Item Would Concern You (US Internet Users) the Most if Stolen?”

A total of 3,024 internet users over the age of 18 participated, choosing from a list of personal items in answer to that question. The list included sensitive personal items such as wallet/purse, house keys, phone, car, and personal data.

The winner by a wide margin was personal data. Personal data was chosen as the item that, if stolen, would concern internet users the most (55%), followed by wallet/purse (23%) and car (10%). 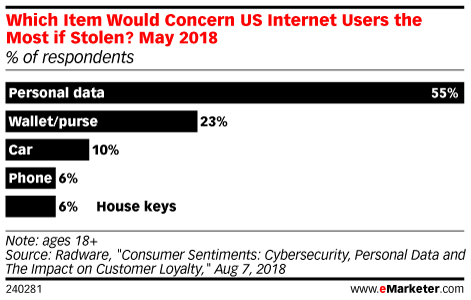 EMarketer notes that in interpreting these results, it is important to remember that online surveys tend to be a little skewed and “don’t always generalize to the entire population.” Also, note that the type of online user that tends to participate in these kinds of surveys are likely to care more about security than the average person.

And has been pointed out by other surveys, people’s actions tend to contradict what they say in this area – they say privacy is their top concern, but they take actions that can sometimes be contrary to that. Still, with all that considered, it is an interesting result that tends to suggest consumers possess recently heightened concerns about the security of personal data.

The ‘Strategic Risk’ That Worries Companies the Most


Marketing pros at a variety of companies appear to perceive this growing consumer concern on the issue. In a separate survey, CMOs and other senior level marketing executives ranked those “strategic risks” that worry them the most. What was number one? You guessed it, a “data breach/misuse of consumer data” was definitely the risk that is most likely to keep them awake at night.

Not only did marketers rank a data breach as their top concern, it beat number two, “increasing levels of competition” by a solid 10%. And while there were several other risks ranked, clearly protecting consumer data is the leading issue of the day. 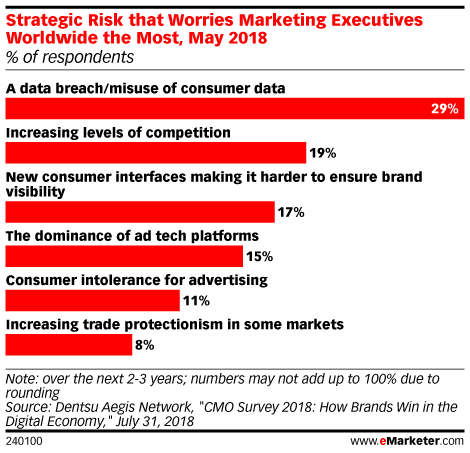 
I believe that this is true for the custom integration industry as well. Protecting the personal data of clients should be a priority concern for any integrator. System security is a complex issue and helping clients understand the issue is a challenge. Following best practices to design in high quality security in any system installation is a must in today’s world.

Clients, integrators tell me, are becoming more vocal on the subject as well. I have had integrators tell me, for example, that it is not uncommon for clients to refuse the installation of a remote monitoring connection in their systems – as beneficial as that would be for them – because of concerns about a potential violation of their personal privacy…by their OWN system installer.

A Fluke? Or is Housing Making a Comeback? Data released on Friday by the U.S. … END_OF_DOCUMENT_TOKEN_TO_BE_REPLACED