You are here: Home / Associations / strata-GEE.com’s 2012 CEDIA EXPO Survey is Bigger Than Ever 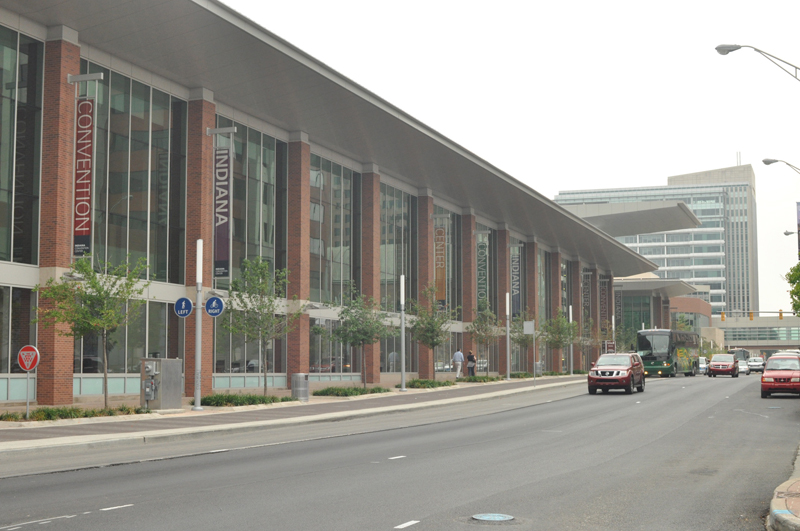 strata-GEE.com’s survey on the 2012 CEDIA Expo has wrapped up and we want to thank everyone for their participation. And participation this year was up over 90% as compared to last year – which was off 20% as compared to the 2010 survey. We have no explanation as to why so many more people took part in the survey this year – however, we received more support from various industry members spreading the word on Twitter and other social media networks than in year’s past, which may have been a factor. A special thanks to those who helped spread the word!

More of you shared your thoughts…and we heard you!…

Before we get to the nitty-gritty of the results, I must issue my by now almost boilerplate disclaimers. Even though we had more participation than in the past…you should still take these results with a grain of salt as the sample is still smaller than we would like to ensure accuracy.

Also, there is a built-in bias to surveys of this nature – people planning on attending tend to participate more in surveys like this rather than those who…for whatever reason…have chosen not to attend. Also, we have a rather large readership of manufacturers and distributors who generally display at shows like this and may have an interest in influencing greater overall attendance.

Finally, these results are influenced by the makeup of our readership which is heavily weighted to upper management of brands and marketing companies. Please keep these disclaimers in mind as you review these results. 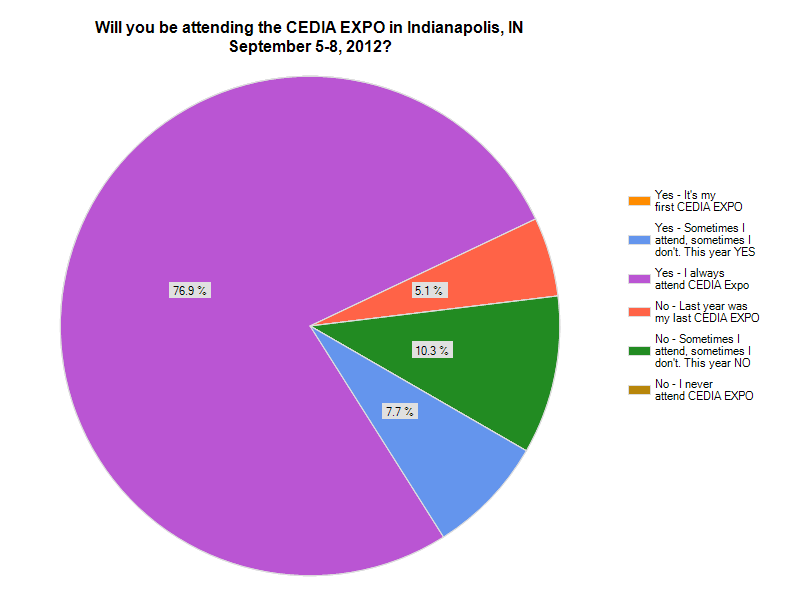 The overwhelming answer from the survey respondents as to their plans to attend the Expo was YES. Almost 77% said they always attend Expo and another 7.7% said sometimes they attend and this year will be one of those times. No one said that this is their first CEDIA Expo…something that vaguely disturbs us as the show needs new attendees to continue to thrive.

We should also note that this year’s result – 84.6% saying they will attend – is up substantially from last year’s survey when 80% said they would attend and 20% said that they would not.

Interestingly, this year we also received two write-in responses in an extra space that we had provided for this purpose. One of the respondents indicated that their attendance at Expo this year was still a “maybe” even though they took the survey less than ten days ago. The other individual indicated that he/she was a rep and therefore their attendance was mandatory – then added, “I would really like to not go this year.”

Second topic…what type of business are you?…

We expanded our options in this category to help better define what type of entity the respondent’s business is. We took this from our expanded CES survey and it seemed to work well. Especially in the case of CEDIA, a wide range of business types attend. 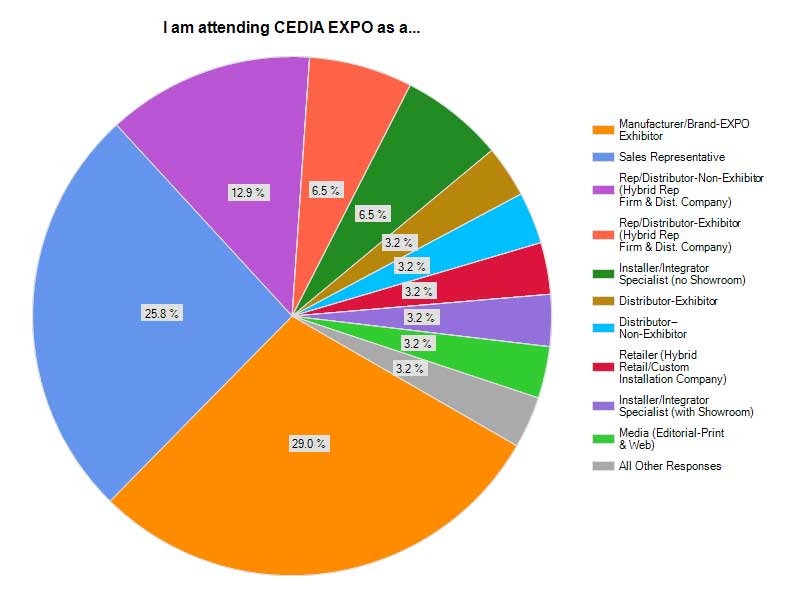 Overall, only 12.9% of the survey respondents were either Retailers or Installers/Integrators. Still, this is up from the 11.8% of respondents who identified themselves as participating in these categories last year.

There were three respondents who wrote in different categories of businesses: two who said that they were consultants…and another who identified themselves as a “multi-channel retailer offering custom design and installation” which probably was covered by our “Hybrid Retailer” category. The others were probably covered by our PR/Marketing/Consultant/or Other Service Agency category.

Of those attending, why?…

We then asked of those who said they planned on attending the Expo, what were their main motivations for attending. For this question, respondents were allowed to pick more than one answer. 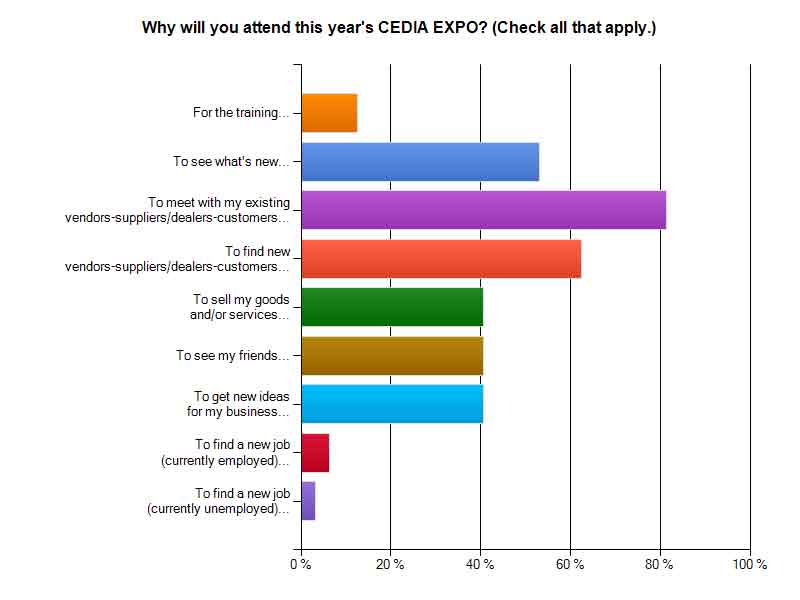 As we have seen in years past and for other events, far and away the greatest reason attendees say they are attending the show is to meet with their vendors (or meet with their customers depending on the type of business they are). This is closely followed by those seeking new vendors or customers. Rounding out the top three, slightly over 53% of respondents said they want to see what’s new.

For this question, I have to admit – our write-ins were interesting. There were a total of three write-ins with different explanations as to why they planned to attend the Expo. One of these said he/she went to seek new projects for his/her company…without identifying what type of company they were. A second respondent said he was attending Expo “Because I have to”…with no further explanation. And finally, a third respondent said he/she was attending Expo, “Because I’m forced to. It’s a huge waste of money for me.”

Of those not attending…why not?…

We then asked those who had indicated that they did not plan to attend which of the provided explanations were the best indicator for their decision not to attend. We provided six different potential explanations for the primary motivation for not attending Expo. Interestingly, only three of the six were selected by respondents. 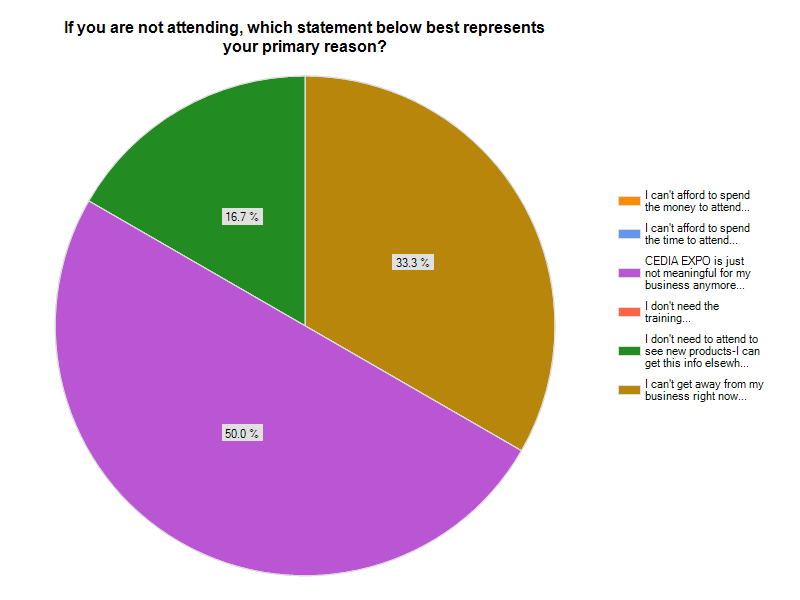 But the biggest group of respondents – 50% – said that the reason they are not going to CEDIA’s Expo this year is because, “CEDIA Expo is just not meaningful for my business anymore.” I guess that CEDIA can take some comfort in the fact that last year, 60% of the respondents chose this response. Also, none of the respondents said that they could not afford to spend the money to attend – although that was one of the top reasons last year.

How important is Expo?…

We then asked two open questions that required write-in responses only. The first of these questions was, “How important is the CEDIA EXPO to you and your business?” 85% of the survey respondents answered this question with a wide variety of responses. About one-third of the responses were leaning negative or very negative. A sample of those include:

And of course, on the flip side, two-thirds or the majority of comments were slightly positive to quite positive. A sample of those comments include:

Expo could be even more important to me, if…

Finally, we offered respondents an opportunity to give us their thoughts on what CEDIA could do to make their Expo even more important to the survey takers and their businesses. A full 68% of the survey respondents offered us their ideas…some more serious than others…but all pretty interesting.

The top responses were:

First of all, I want to thank each and every one of you who participated in this survey. We are all very busy and I am very appreciative of those of you who took the time to share your thoughts with us.

Secondly, there is some genuine emotion and good feedback in these results. More of you sought to participate and – for the most part – you participated fully. A whopping 82.5% of the survey respondents started and completed this survey.

Our industry is in transition. Surveys such as this one can start a very healthy dialogue with industry participants who are directly and indirectly involved in events such as the EXPO.