Samsung Electronics Co., Ltd., the undisputed global leader in TVs and other key products, launched its CES 2015 press conference in a pattern familiar to those of us who have attended them over the years. But there was one moment in this carefully scripted presentation this year that caught our attention…a moment unlike any other we’ve experienced before at a Samsung presentation. It was a moment when the company actually sounded a touch…defensive.

See what happened during the Samsung presentation that surprised us…

As in previous years, Samsung Electronics America President and COO Tim Baxter took the stage – striding confidently to center stage in front of a huge, room-wrapping video screen that showed dynamic graphic images throughout the presentation. It was a big group of journalists, perhaps the biggest so far at this CES.

Looking relaxed and confident, Baxter told the audience that Samsung sought to help consumers “pursue their passions.” “That’s what drove our innovation at Samsung,” Baxter said, referring to their success in 2014.

In order to accomplish this, Baxter said, the company “listened to our customers” and then combined the insights gleaned there with “the knowledge of experts, partners, designers…and even world class chefs.” But the company, he said, did this all “with one aim…to help you live smarter.”

Apparently, their efforts were a success…and Baxter went on to describe the company’s spectacular growth in 2014 – giving specific statistics to prove his point. Ultra High Definition (UHD) was a point of focus for the company’s TV division in 2014, and Baxter told reporters that Samsung now owns 60% share of the UHD TV market.

The company saw their overall TV market share increase as well – by another 5%. Interestingly, Baxter says that half of their UHD TV sales were for curved TVs, “proving that consumers clearly see the value of the immersive curved TV experience.”

The Samsung President went on to describe market share growth in each of the home appliance market, the mobile phone market and the tablet computer market. And the company, he says, is “now in our third generation of wearables and have used our learnings to achieve a 60% market share in this space.”

Redisovering the role of the home…

Moving on to 2015, Baxter says that “families are rediscovering the role the home plays in their lives.” Samsung understands that it is at the intersection of great technology and content and services. With that in mind, he told the press that surveys show that the Internet of Things is of interest to fully one-third of all Americans…but only about 2% own it. This is, he says, “a huge opportunity for Samsung.”

Interestingly, Baxter took time to announce a new solid-state drive from Samsung, the SSD-T1. It was very small and very light…but it didn’t look like Baxter got the reaction from the crowd he was seeking. The audience seemed unexcited about the innovation of a small, portable hard drive. It did seem like an odd spotlight for such a key presentation…and a rare “miss” for the company’s presentation.

Turning to content, Baxter told reporters how the company intends to expand its Milk content service. Milk, which started as a music service, has since been expanded to include video content as well. And at CES 2015, Samsung announces that the service will include new content with Milk VR (for Virtual Reality). Milk VR will have a “daily stream of 360° videos.” Fans of virtual reality will find it indispensable, Samsung believes. (They gave no stats, however, on just how many VR fans are out there.)

With that, Baxter turned the program over to Joe Stinziano, Executive Vice President, who started his segment by telling journalists that Samsung has been the leader of the TV business for the last nine years.

“We are the market leader because, simply put, people want to own a Samsung,” Stinziano told reporters. “And what we’ve hear loud and clear is that customers want the UHD experience and they absolutely love our curved UHD TVs.”

Then Stinziano announced the formation of the UHD Alliance, an association of companies involved with UHD technology and content that includes companies such as 20th Century Fox, NetFlix, and DirecTV. Interestingly, the alliance also includes competitors such as Sharp and Panasonic – but Samsung looks to be the 800-pound gorilla of this group.

“The UHD Alliance will establish standards and guidelines across the UHD ecosystem,” Stinziano said, with no specific details being provided.

SUHD and a pot shot at OLED…

Then Stinziano unveiled what is surely the star of the show for Samsung – SUHD. The company never says what the “S” in SUHD stands for, but we suspect it stands for “Samsung.” It could, however, stand for some other word…like “super.”

In an introduction that sounded to us like a touch of hyperbole, Stinziano announced that Samsung has invented a new technology that “produces an incredible picture…but solves issues like reliability, lifespan & cost… [It is] whiter than any other display technology, with rich colors better than OLED. And all with the intense detail of UHD.”

Suddenly the wall opened up and a platform with the letters SUHD printed on the front, rolled forward with a large TV on a stand on top of the platform. This model, we are told, is the 88-inch JS9500 SUHD TV. “It takes picture quality to a whole new level,” Stinziano proclaimed.

With proprietary nano-crystal semiconductors, color remastering “engine,” Stinziano claims that their SUHD sets are “two and a half times brighter than conventional TVs…offer 64 times the color expression of conventional TVs…and offer the most accurate color display.”

After a dramatic pause…apparently waiting for applause that was not to come, Stinziano went on to bring out a guest from Hollywood, a digital colorist. When prompted, Stephen Nakamura says his first impression of the Samsung SUHD technology is – well – it’s great.

We couldn’t help but notice the slam on LG’s OLED technology. This is the first time we’ve heard Samsung being somewhat defensive about technology. While they tried to come off as better than LG’s key technology, the comparison with OLED is likely to encourage folks to check it out as well.

Samsung Smart TVs are all powered by the company’s TIZEN operating system. The company says TIZEN is simple and intuitive.

Samsung will have a total of three series of SUHD TVs, with a range of screen sizes from 48-inches to 88-inches. 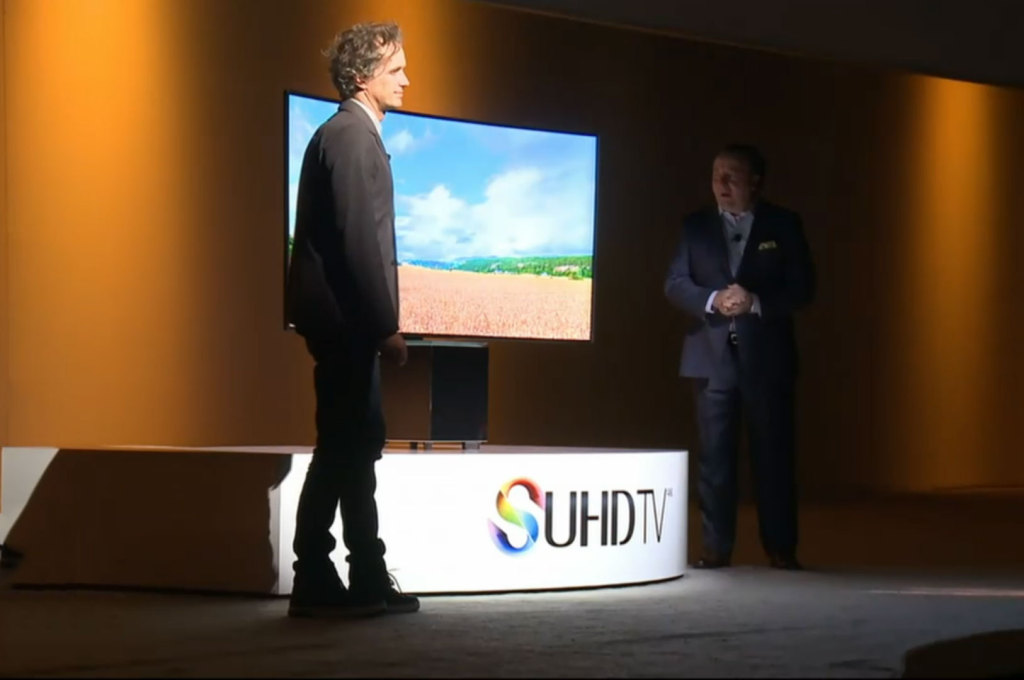 The most innovative *audio* supplier?…

Samsung also announced it intends to “set out on a mission to become the most innovative audio company in the world…extending our success in TV innovation to audio,” Stinziano told the group. Samsung has invested in its “state-of-the-art” audio lab in Los Angeles. The company, he says, has assembled the world’s top audio experts.

The first product of this new effort is a 360° speaker system which utilizes a “ring radiator.” And in line with the pattern during this event of announcing hardware…then announcing complementary content or services…Stinziano also announced Milk music, which will “come to this platform.”

The company’s audio efforts, to us, appeared less than impressive as compared to their video offerings. But perhaps audio is still an emerging technology that remains an area of research for them.

Learn more about Samsung at: www.samsung.com/us.