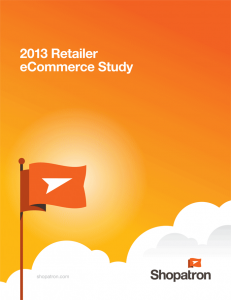 Results from a new survey released today verify what you may already know – or at least suspected – retailers will either stop or dramatically cut back on purchases from brands that choose to compete with them by selling directly to consumers on the Internet. And a lot of retailers feel this way…71% said they would stop or reduce spending with brands that chose to do so.

See more about this survey, including other interesting retailer insights…

Because the survey was taken with participating retailers in Shopatron’s program, there may be some bias positive to their solution. And several questions in the survey titled 2013 Retailer eCommerce Study seemed top be geared towards establishing the popularity of their system. Still, the results provide some validation to the “gut feeling” than many in our industry have that brands who compete with their dealers, do so at their own risk.

Things get a little heated…

For example, when retailers were asked if they would purchase from brands that sell their products online to customers directly, 33% said no. And another 37% said it would be a factor for them to consider when deciding to do business with those brands.

Where it gets a little more heated is when retailers were asked about how their purchasing patterns would change with brands they currently sell if they learned that brand was going to sell direct to consumers in competition with them. In this case, fully 71% said they would either stop buying from that brand, or reduce their purchases – with 23% saying they would buy “as little as possible from that brand.”


Another 15% weren’t sure exactly what they would do with their purchases. Only 14% said that they would not change their buying patterns.

The survey also sought to establish just how big a factor eCommerce was in the retailers business. Surprisingly, most indicated they were moving to a “bricks and clicks” model…although the largest response – 43% – said eCommerce was less than 5% of their overall revenues. But a respectable 39% said that eCommerce was between 6% and 50% of their total revenues. That’s an awful large range…we’d like to see that broken down into more meaningful steps…but an interesting response nonetheless.

I hope everyone has a HAPPY 4TH OF JULY with lots of family, frisbees, hot dogs … END_OF_DOCUMENT_TOKEN_TO_BE_REPLACED