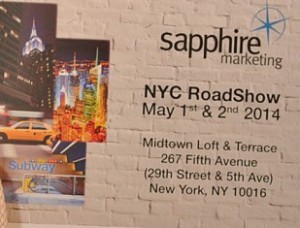 Sapphire Marketing, a well-known manufacturer’s sales representative company focusing on the commercial and residential integration channels in the Northeast, held their sixth dealer “RoadShow” in mid-town Manhattan on Thursday and Friday of last week. We had the good fortune of being invited to attend the event courtesy of our friend Dawn Allcot of Crestron’s PR department…and we’re glad we went.

See more on this event, including some impressive presentations by major integration brands…


Sapphire Marketing’s NYC RoadShow was held at the Midtown Loft & Terrace on Fifth Avenue in Manhattan, an upscale event facility. The show took up an entire floor and a part of the roof of the building with booths and displays of many of the brands that Sapphire represents. Major booths in the show represented Crestron, Vaddio, Digital Projection, InFocus, RevoLabs (now part of Yamaha), and many more.

We attended the first day of the two-day event, arriving late morning and staying into the mid-afternoon. There was a good crowd already in attendance when we arrived, and most manufacturers had national level executives representing their brands. Sapphire Marketing addresses both the commercial and residential integration channels, so attendance was helped by this market double dip.

The show was consistently busy and at times during the day, it was literally shoulder-to-shoulder in parts of the hall. It was not uncommon to have to wait several minutes to speak with company representatives at many of the booths.

Immediately to the left of the entrance was a very large Crestron booth, one of Sapphire Marketing’s largest lines. Crestron had a multifaceted booth showing many of the solutions for the multitude of market segments the brand covers.

But the hottest topic for Crestron that seemed to interest most integrators, was their 4K Ultra HD capability. With a large section of the booth devoted to 4K and high-resolution systems, there was a constant stream of integrators asking for more details on the Crestron approach.

Just about every booth had something interesting for integrators, but a couple of presentations in particular caught our interest.

There was much, much more including some really cool video processing gear from Vaddio, a really interesting touch display from InFocus called the Mondopod (kind of like the biggest tablet you’ve ever seen) to name just a couple more.

To us, the show looked like a huge success. We sat down with Sapphire Marketing principal Marla Suttenberg who told us that this year’s NYC RoadShow was the biggest ever for the rep firm. Suttenberg told us that prior to the opening day, Sapphire had received a record 650 RSVPs from dealers. This was about 100 more than the RSVPs for the same event a year earlier.

Suttenberg told us that she felt that this big increase in attendance might reflect the fact that the market is experiencing more substantial growth. Although she didn’t have any hard data to prove it, she says that anecdotally they’ve seen increased activity recently.

One of the trends driving this increased activity is the integration of AV with IT. “IT guys are really interested in AV,” Suttenberg told us. And that is opening up some new business for the channel.

Sapphire Marketing has a total 12-employees (10 on the road) and covers a large geography from Pennsylvania to New England. They hold two RoadShows a year, one in New York and one in Boston. The company is headquartered in Woodcliff Lake, NJ.

A Fluke? Or is Housing Making a Comeback? Data released on Friday by the U.S. … END_OF_DOCUMENT_TOKEN_TO_BE_REPLACED