You are here: Home / Brands / AudioSource: Keeping the Foundation, But Building a Whole New Business

The theme for CEWeek this year – as far as we’re concerned – was “CHANGE.” There were very few “traditional” products shown or updated – and a plethora of new products and categories, such as wireless systems, mobile devices, innovative [predominantly mobile] accessories, new app concepts, and more. And one interview we conducted – with AudioSource CEO Tom O’Mara – seems to embody that sense of change, as he seeks to – while keeping the company’s foundation – build a whole new (and changed) company.

We recently told you about a new product from AudioSource – the Sound pOp. But you might not know that AudioSource was once part of a mini-conglomerate known as Phoenix Gold which also included (aside from Phoenix Gold) the Carver brand. CEO Tom O’Mara, in an interview on the floor of CEWeek last month, told us that as the financial collapse of 2007/2008 hit the industry, it became clear that he needed to refocus his business. That was a huge strategic decision that would drive their business in a whole new direction.

As part of this refocus, O’Mara decided to divest Phoenix Gold, which he sold to Aamp of America in 2009. Carver was then sold off to a manufacturing partner who wanted to focus on the professional side of that business.

This left O’Mara with AudioSource…but that was just the beginning. Aside from the financial crisis which was impacting the whole country – it was easy to see that the consumer electronics industry was changing…and changing dramatically.

“We felt like with everything that was going on, it made sense to just focus on one brand and one category,” O’Mara told us. “And that’s what AudioSource became.”

But AudioSource was deeply entrenched in the custom installation and 2-channel audio business…not where the market seemed to be heading. So a new strategic shift had to take place.

“The main focus of AudioSource was 2-channel amplifiers and [the amplifier category] still is the biggest part of the business – but it’s changing,” O’Mara explained. “And it’s intentionally changing.”

O’Mara went on to explain that in 2011, AudioSource partnered up with a Swiss manufacturer of DSP chips to help them transition their line into what were emerging categories. These new categories, such as mobile and Bluetooth, were clearly going to have a major impact on the industry as consumer tastes were shifting.

“In 2011, we partnered up with a Swiss manufacturer of DSP chips called Sonic Emotion and we launched our first soundbar,” O’Mara noted proudly. “We felt soundbars start to give us some diversification in the channel – also makes us more appealing to retailers. Where we used to be heavily in distribution, we slowly started to balance the company so it focused in retail, distribution, and online sales.”

Speaking of change and diversification…

This concept of “change” and “diversification” became a big theme of our discussion with O’Mara as he explained the dramatic transformation taking place at AudioSource. O’Mara drove the point home about the realization that once they decided to focus on AudioSource, it was eminently clear that AudioSource had to change as well.

“There’s too many changes that have happened since the 2008 crash and the interim, and people just do different things.” O’Mara said, talking about changes in consumer behavior. “So whether you want to call it ‘mobility’ or ‘plug ‘n play,’ everybody’s attaching to sound and to their media through devices that are on the move basically. And so we needed to basically start focusing our product planning and strategies on those areas.”

The proverbial light bulb pops on…

“The soundbar started that – I mean it’s a simple plug ‘n play product – but it’s not mobile,” O’Mara explained. “The bluetooth speakers certainly feed right into the mobile lifestyle of today’s customers.”

The company is early into the process, but AudioSource is being clearly redefined into more mobility, plug ‘n play, and lifestyle businesses. And launching a soundbar, “That was a big change for us,” O’Mara exclaimed.

But identifying and going after new and larger markets, does not necessarily mean success is assured. There are a lot of players in the soundbar and Bluetooth businesses – many with greater resources than AudioSource. We asked O’Mara, how will you differentiate your brand from all of the other players in the game?

“We’re good at doing audio,” O’Mara explained. “But we’ve got to take our expertise in audio and move it into different platforms and different products so we can get into these high velocity markets. We will focus on solutions [like other companies] but we’ll also make sure that it’s an audio product with a good sound.” 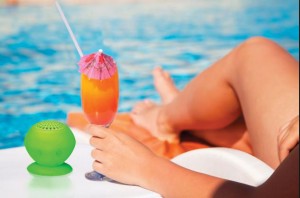 As proof of their differentiation, O’Mara says look no further than the recently introduced Sound pOp. Just listen to it, he encouraged us. Remember, he says, it’s only a $39 speaker, but…”there’s a Class D amplifier in there, there’s a DSP chip in there, so it will actually go all the way down to 300 [Hz] – and that’s really good.”

Other bluetooth speakers out there in that price range can’t touch the Sound pOp as far as sound quality, O’Mara claims. “All they do is they pump up that mid [range] just to make it sound loud, but it is not a quality sound,” he told us.

Not just Bluetooth for Bluetooth’s sake…

According to O’Mara, many other brands throw in a technology like Bluetooth and use that as its key selling feature – paying no, or very little, attention to sound quality. AudioSource will use their long history as a quality audio manufacturer as the key differentiator.

“I think a lot of the other guys focus on technology and they don’t focus on the audio,” O’Mara said. “I think that’s where our advantage is.”

But the company does not intend to go after the high-end either. O’Mara said that he does not view their role as taking on the Jambox or Beats of the world. “That’s not our niche either,” O’Mara told us. Rather, AudioSource will seek to provide consumers with a quality product at a high-value price.

The Sound pOp is a small product that will have a large impact for AudioSource and, the company hopes, the market. With Sound pOp, AudioSource diversifies their product categories, diversifies their distribution channel strategy, opens up their customer base by appealing to an entirely new consumer demographic (from a predominantly 50-year old male customer to a 15- or 16-year old male and female customer, O’Mara told us)…basically re-invigorates their entire business.

But one thing will NOT change for AudioSource – its commitment to the custom installation market. The company will move forward with a refined assortment of its legacy products as well. Right now, the company boasts seven 2-channel amplifiers and one 12-channel amplifier in its line-up. O’Mara admitted that this will eventually be contracted down to a level more appropriate for the size of the market.

A tale of two companies…

“We know that our faithful customers are depending on [the fact] that we continue with some of the key [amplifier] models because they are still doing some installs,” O’Mara told us. “We obviously are not going to abandon the [custom installation] market.”

So AudioSource could almost look like two separate companies – and O’Mara even admitted that at times it can feel that way inside the company. But in discussion with O’Mara it seems clear to us that he feels that they are making dramatic changes more akin to building a whole new business on top of a very solid foundation.

The holiday season is upon us and 2022 is quickly waning. Longtime Strata-gee … END_OF_DOCUMENT_TOKEN_TO_BE_REPLACED