You are here: Home / Industry Trends / OK, 3D HDTV Flopped – Industry Turns to Next Trick in Bag: Ultra HDTV
It’s a tough time to be an executive at one of the major television manufacturer’s these days. After a record run – with help from the U.S. government mandating a switch to digital broadcasting virtually forcing American consumers to upgrade their sets – the industry appears to have lost its mojo. So, with great fanfare, manufacturers went back to the well, trying to convince consumers to “upgrade” their sets to new 3D capable sets. But 3D was a dismal flop.

Now manufacturers have dug deep into their bag of tricks to offer 4K HDTV, also known as Ultra HDTV…

We’re starting to hear the banging of the Ultra HDTV (or UHDTV) drum, as several reports have appeared in the media noting that Samsung, LG, and Sony will show large UHDTV sets at the International Consumer Electronics Show this January in Las Vegas. More and more media are noting the coming format – but the intensity of the enthusiasm of these reports is tepid at best. And in many cases, they are downright skeptical of the potential for the success of the new format.

A recent report on Investors.com – a site clearly targeted at an audience that would most likely be qualified to purchase a new UHDTV – announced the new format. And in just the second paragraph, the writer intoned:

“But don’t chuck your current TV just yet. It will take a few years for the new sets to reach mainstream pricing and for content to emerge that takes advantage of the higher-resolution screens.”

A little later in the article, the reporter issues a more direct warning noting that, “Today there is no ultra HD content available…” Investors.com even quotes the CEA’s Steve Koenig as saying, “It’s going to take a while…” for UHDTV to take hold. “It will probably be the back half of this decade.”

Ultra HDTV has more than 8 million pixels or four times the resolution of today’s 1080p sets. Manufacturers hope that this higher resolution will encourage people to step up to larger screens which more readily show off the advantage of UHDTV technology. And – oh by the way – also happen to be more profitable for the manufacturer to sell as well.

Earlier this year, we reported on a new higher resolution TV format out of Japan also known – confusingly – as Ultra HDTV, but with an even higher resolution than the 4K UHDTV about to be introduced in a couple of months. This format feature 33.2 megapixels or 16 times higher resolution then the current standard – and its founders are seeking to have it set as a worldwide standard.

Our report generated a slew of comments from readers who all questioned the need for UHDTV. Len Schneider asked, “But answer this: Where is the consumer benefit?” And reader Michael Riggs (former editor of several A/V magazines) noted that for most homes with 65-inch or smaller screens “1080p is completely adequate.”

Time to get on the bandwagon?… 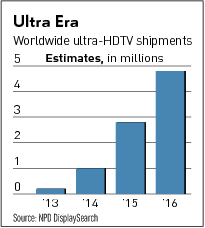 There are many questions about the viability of UHDTV. Many pieces of the puzzle have to come together to make it happen. First and foremost, content has to be created…and transmitted in a new format. It is unclear whether all the necessary constituents such as broadcasters, cable companies, satellite companies, etc. are ready to fall in line behind this latest industry gambit.

Some of these constituents were persuaded to invest – and invest heavily – in 3D. As this technology has fizzled – they may feel snake bit and less likely to give the industry the benefit-of-the-doubt next time.

WiSA Technologies, Inc. (NASDAQ: WISA) has been on a wild and rocky ride over … END_OF_DOCUMENT_TOKEN_TO_BE_REPLACED