You are here: Home / Brands / 7 Lessons on Marketing Strategy from My Day with the Cake Boss Two weekends ago, we celebrated my wife’s birthday. For the last few years, one of the things she most wanted for her birthday was a birthday cake. Not just any cake, mind you, but a cake made by Buddy Valastro – TLC’s Cake Boss. This is not as simple of a request as it sounds and for the last couple of years, I couldn’t fit it into my schedule to make it happen.

This year, I made it happen – and learned something about marketing strategy from the Cake Boss…

For those who don’t know (if there IS anyone who doesn’t know), Cake Boss is a show on The Learning Channel (TLC) based on the life and times of Bartolo “Buddy” Valastro, owner and master baker at Carlo’s Bake Shop in Hoboken, New Jersey. A large Italian-American family, there is plenty of drama on the show – as well as fantastically creative custom cake designs whipped up in front of the cameras.

Carlo’s Bake Shop was a small, sleepy neighborhood bakery…much like the bakery in your town I would suspect. However, thanks to the popularity of the reality TV show, Carlo’s Bake Shop has gone big time and become popular – unbelievably popular. So popular, in fact, that it has turned Hoboken into a tourist attraction. 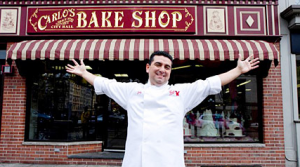 It also became popular with my wife (and a few of my kids), who watched the show regularly…came to know the family…and turned into fans of the show. But we never physically visited Carlo’s Bakery since it is not exactly around the corner from where we live. So that Saturday morning two weeks ago, when I told my wife to get dressed we’re heading to Hoboken baby – you should’ve seen her shocked expression!

We arrived just after noon and parked in a public parking lot two blocks away. As soon as we turned the corner of the building along side the parking lot, we saw the end of a long line of hundreds (thousands?) of people. Yep…that was the Carlo’s Bakery line – two huge city blocks long.

Little did I know that we would be exposed to some unique marketing strategy by the Cake Boss:

We waited a total of two hours to get into Carlo’s Bake Shop. The line in the first block was under an overhang which blocked the sun (and would also protect from rain). However, when you transition to the block in front of Carlo’s – you’re completely exposed to the sun. It was a warm – though not hot – day so it felt good to get into the bakery’s air conditioning.

But, the bakery was packed! I was surprised at how large the groups were that the line handlers were letting in. But generally, it was an orderly group. Only then did we discover the actual purpose of the tickets that they handed out – when you entered the bakery, they told you to look around and wait for your number to be called to be served (see the lighted number on the wall at the back of the photo).

Understand that it took us two hours to get into the bakery. During the whole day, the line never shortened and was as long when we left in the late afternoon as it was when we arrived at noon. According to “Mike” one of the Carlo’s Bakery line control folks, the average customer spends between $100 – 200. Considering that we saw thousands of people by the end of the day, this has got to be the single largest grossing bakery in the U.S. in terms of average daily revenues.

How powerful is the Cake Boss show in driving Carlo’s Bakery’s business? The folks standing in line in front of us came from Texas to see the Cake Boss.

I have to admit…it is an impressive operation. But all day, I had one fear. After two hours of standing in line…would the cake be great? Or would it simply be good or average…and we would have succumbed to marketing “hype”?

So the Cake Boss delivered. Or should I call him…the Marketing Boss?!?!

P.S. The Cake Boss announced the day after we visited Carlo’s Bake Shop that they are about to begin shipping baked goods nationally.