Moody’s Japan announced this week that it has raised its rating on Sony’s credit to Baa3, one step up from “junk.” This is the first time that Sony’s credit has been determined to be “investment grade” in years and reflects the company’s improved financial performance.

But Moody’s had even more good news for Sony. Read on…

Moody’s Investor Services has a sliding scale that it uses to rate the status of credit standing of companies. This is mostly used to determine the interest rate these companies must pay to those investors who buy their bonds – a key fund raising tool. The lower the credit standing of the bond issuer (the company), the riskier the investment in their bonds – and the higher the interest needs to be to motivate investors and compensate them for their greater risk.

In Jaunary 2014, Moody’s dropped Sony’s rating to below investment grade – a rating commonly referred to as “junk.” Receiving such a rating causes a significant increase in the company’s borrowing costs, as the interest required to sell junk bonds can be particularly onerous.

Even Better: The Outlook 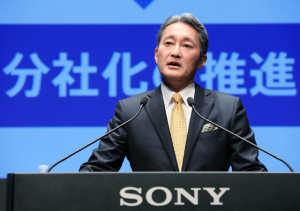 However, as good as this news is for Sony, the reality is that a rating just one step above junk, is not a particularly good rating either. But the rating is just one element that bond buyers look at. Also important is what as know as the outlook that Moody’s has determined as part of their rating process.

In this case, Moody’s did Sony a solid and said that the outlook for Sony was “stable” and that the company should be “able to maintain an appropriate financial performance for its investment grade rating [and] an expectation that the Game & Network Services segment will continue to improve and [generage] stable earnings.”

Some Negatives, and Some Caution, But Mostly Good

The agency noted a couple of possible negative issues – including the impact of the Kumamoto earthquake, and an impairment charge related to writing off its battery business – both of which they considered “one-off factors” with minimal long term impact, but negative nontheless. It also served notice that “downward pressure” could emerge if certain fundamentals – i.e. profitability, cash flow, and leverage deteriorates…and if Sony’s non-financial services segments fail to maintain operating profits.”