You are here: Home / Marketing / Sometimes…You’ve Just Got to Jump 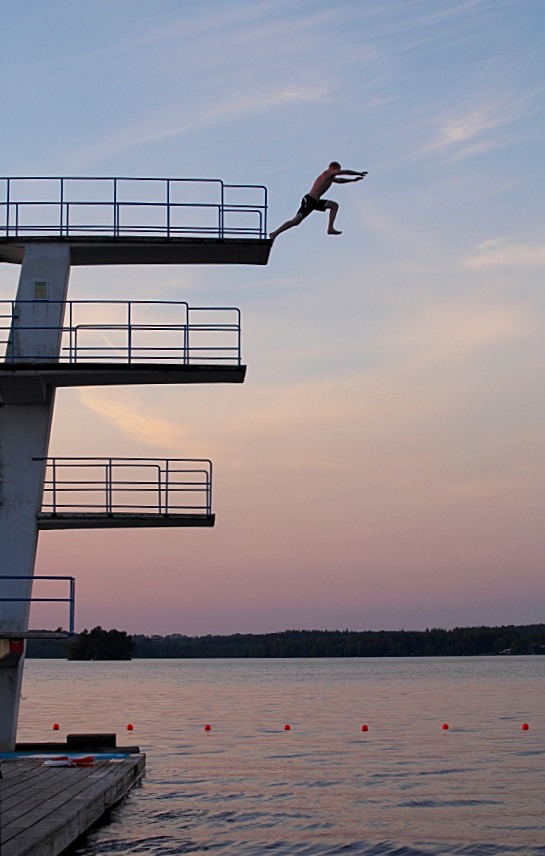 www.stratecongroup.com to www.strata-GEE.com, you know that I was scared to death about making this change – literally losing sleep and enduring a wide variety of gastrointestinal issues (I’ll spare you the gory details). Why?

I launched stratecongroup.com originally in 1999 to promote my marketing company. When it needed a refresh, I updated it and moved it to Microsoft web hosting as part of an intelligence gathering project for a client who wanted to understand why customers chose self-created websites from free- or low-cost website providers like GoDaddy.com or 1+1.com (and Microsoft) – rather than their customized (albeit more expensive) solutions.

Initially, you could count on the fingers of one hand the number of visitors and page-views www.stratecongroup.com experienced in a month’s time. It was pretty dismal.

I needed a way to build traffic, and facilitate retention of the company name, so I launched two newsletters: the ALERT and the BEACON. To make a long story short, it worked beautifully. People – including future clients – could now remember the Stratecon name. And my effort to build traffic with (what I hoped were) insightful industry articles and stories generated consistent growth as more and more people subscribed to newsletters which led them to the articles stored on the Stratecon website.

It worked so well that we continued to successfully increase page views week-after-week, month-after-month. We eventually were able to achieve thousands of page views – not in a month – but EVERY WEEK! It took a lot of blood, sweat, and tears to get to this level of readership and we were pleased with our progress.

You know that old saying that goes “if it ain’t broke, don’t fix it?” Well, Microsoft, the low-cost host of stratecongroup.com website, “broke it” by announcing that they were getting out of the web hosting business. This appeared to be the beginning of a long, cataclysmic business nightmare.

So we scrambled to find a new host, find and pick software to build a new web presence, build that web presence, and then re-connect with our readers. Like building a new house – it is both an exhilarating and a terrifying experience. There were a million decisions that needed to be made, many of them making a significant impact on what visitors would experience when they visited our website. Not only that, but in our case, we had a compressed time frame within which to make them. A lot of decisions were made from the gut…there just simply wasn’t any time to sample and test.

This SOFT launch was sure HARD on me…

Finally, after about six weeks of concerted effort – and two weeks going dark with no web or e-newsletter presence – we did a soft-launch on May 17th. This was absolutely a terrifying experience!

I didn’t sleep a wink the night before the launch. Questions and concerns kept rolling through my head….causing me to toss and turn all night long. What if no one likes the new design? What if no one can find the new web domain? What if there’s no traffic? What if there’s so much traffic the new web host can’t handle it? What if the website does not function as it is supposed to? My mind rolled through a slew of scenarios – and possible consequences, mostly horrible. It was an exhausting night!

The result? I’ll sum it up in one word…HUGE! May 17 saw record traffic with many of our regular readers leaving positive comments. The ALERT e-newsletter itself set a record in the number of click-thrus. And even though there were four other big stories in that issue, the website announcement garnered the lion’s share of click-thrus by a wide margin – setting an all new click-thru record for an individual story! Whew!

So after such a huge launch, I of course expected things to calm down and our numbers to come back down to earth. So what happened during launch +1 week? Unbelievably, we set another new one-day traffic record almost a full 15% higher than our previous one-day traffic record! Not only that, our daily average traffic INCREASED 30% over the previous week! Are you kidding me?

Well then, how about launch +2 weeks?…

So surely the next week, launch +2 weeks, would slow down…right? Surprisingly…WRONG! Our average daily traffic has increased dramatically again. In fact…and believe me when I tell you that it amazes me to say this…we’ve experienced an 88.7% INCREASE in our traffic since switching to our new web domain and website design.

Now it may slow down eventually. We may be benefiting from the glow from our soft launch. But remember, we have not even officially launched yet! I see no signs of it slowing down…and these results are motivating me to push even harder!

So what does this mean?…

Well, for one thing, I need to get used to bigger numbers. And for another thing, I now wish Microsoft had forced this nightmare decision on me a few years ago!! After cussing them out when I first heard their announcement, I figure I now should send them flowers or candy or a card or something.

They’ve done me a huge favor – the nightmare turned out to be a DREAM!

So what did I learn from this experience?

BOLDLY GO WHERE MOST PEOPLE DON’T – BEYOND YOUR COMFORT ZONE
Just because you have a good thing going doesn’t mean it can’t get BETTER! Don’t fear making big changes…sometimes what seems like a disaster – is simply opportunity in disguise! We had come a long way with www.stratecongroup.com…but our numbers were beginning to plateau. Now we are back on a solid growth track. Go beyond your comfort zone.

TRUST YOUR INTUITION
A while back, our Chamber of Commerce hosted a presentation from the local police department on how to improve the security of your (mostly local retail) business. The key takeaway? If someone enters your store and it doesn’t feel right – don’t intellectualize the situation and talk yourself out of calling for help because you’re “just being silly”…call the police now. In the police department’s experience, your initial intuition is almost always right.

When treading into unmapped territory, don’t be afraid to trust your intuition. In our case, I had been involved in developing websites for clients and had some insight based on what had (or sometimes had not) worked for them. Still…when applying it to our situation, I almost talked myself out of employing elements that eventually went on to become some of the most popular parts of the new design. Trust your intuition.

BE BRAVE
No doubt bowing to the FURY they stimulated with their announcement, Microsoft ultimately offered a new service that would have allowed website owners to port their old designs over to a new, even less-featured service. They must have been bruised by the kickback from angry customers that had relied on them to provide web services.

However, this was a website light service – basically serving up simple websites as part of bigger package of services including online applications, document sharing services, etc. Hosting websites appeared to be more of an afterthought. Some website owners on the old service were too scared to make a change and agreed to simply move over to this new “website light” service.

But we held our breath and made a “leap of faith” into a whole new realm. It was incredibly scary – and absolutely the right thing for us to do. Be brave.

So how about you? Have you faced tough decisions that forced you to stare certain doom in the eye? Have you had to pull out a mental machete to hack away at entangled vines of fear and uncertainty…only to come out of the jungle even better off than when you entered?