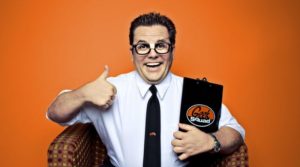 Ah…those geeks on Best Buy’s Geek Squad. They’re so cute aren’t they? With their little white shirts, clip-on black ties, and nerdy glasses taped on the nose bridge. You just know that when you give them your misbehaving computer, they’re going to get right to fixing it. But would you hand your computer over to a member of the Geek Squad if you knew he was acting as a kind of paid FBI agent by proxy, one who intends to scour your hard drive and look through your files to find anything possibly compromising to hand over to the FBI…and collect a bounty? Or would you choose a different repair center, one that simply focuses on repairing your computer?

Yes, some Geek Squad members are paid informants for the FBI…

The Electronic Frontier Foundation (EFF) has discovered that some Best Buy Geek Squad members are paid by the FBI to scour the hard drives of computers in for repair in order to find potentially compromising files or images to then call in the FBI to review that material. If the material is deemed illegal, then FBI agents seize the device, conduct an investigation, and arrest the owner of the computer.

Here’s the thing…outside of the Geek Squad, the FBI can’t just take and search your computer without going through the proper channels, which includes establishing probable cause, and seeking a search warrant from a judge. It is an important legal process in which a judge considers all factors in order to balance the citizen’s right to privacy with the needs of law enforcement, a right protected by the Fourth Amendment.

Apparently, your constitutional Fourth Amendment rights are worth about $500, as once the Geek Squad calls in the FBI, the process of search and seizure, and arrest and prosecution is put into motion…without a warrant. But if a Geek Squad is a paid agent of the FBI, is that warrantless search itself legal?

The issue was first brought to the attention of the EFF in a case initiated about a year ago involving a doctor in California named Mark Rettenmaier. When his computer wouldn’t boot up, Rettenmaier took it to his local Best Buy to get advice from the Geek Squad. They told Rettenmaier that the hard drive needed to be replaced, and if he wanted to recover all of his data, his old drive would have to be sent to a central Geek Squad repair facility in Kentucky for this special type of data recovery.

Geeks = Confidential Informants to the FBI

The Geek Squad employee there found an image of a naked child on Rettenmaier’s drive and since this office worked with the FBI, they notified agents to come to view the image. Ultimately, Rettenmaier was subjected to arrest. Without getting too deep into the weeds of this case, the doctor’s attorney, James D. Riddet, was able to discover the extensive connections between the local FBI office and Geek Squad supervisors, at least four of whom received payments of around $500 by the FBI for their work feeding them this type of information. The FBI considered these Geek Squad employees as “confidential informants.”

There are troubling elements on both sides of this case. However, a similar case was overturned on appeal in favor of the defendant just month’s before Rettenmaier’s troubles began.

In an article by OCWeekly, this excerpt tunnels down to the fundamental issue:

But the biggest issue remains whether Geek Squad technicians acted as secret law-enforcement agents and, thus, violated Fourth Amendment prohibitions against warrantless government searches. Riddet [sic]claims records show “FBI and Best Buy made sure that during the period from 2007 to the present, there was always at least one supervisor who was an active informant.” He also said, “The FBI appears to be able to access data at [Best Buy’s main repair facility in Brooks, Kentucky] whenever they want.” Calling the relationship between the agency and the Geek Squad relevant to pretrial motions, [U.S. District Court Judge Cormac J.] Carney approved Riddet’s request to question agents under oath.

The case is still pending, but has already raised troubling questions. For example, the image on Rettenmaier’s computer was in a unallocated” space, or in other words, it was a deleted file. Courts in the United States have already asserted that files in unallocated space do not constitute “knowing possession” because it is “impossible to know when, why, or who downloaded them.” As the OCWeekly article noted, malware can place files like this on your computer without you even being aware of it. So it is not clear if Rettenmaier was aware this file was on his hard drive.

Other evidence in the case suggests FBI agents lied to a judge to later get the warrant to search his home, knowing that if they truthfully indicated the file was in unallocated space, their request for a warrant would be denied by the judge. But like we said, there are a lot of troubling aspects to this case on both sides.

Some, like the EFF, are questioning Best Buy’s role.

“As we said more than a year ago, our Geek Squad repair employees discover what appears to be child pornography on customers’ computers nearly 100 times a year. Our employees do not search for this material; they inadvertently discover it when attempting to confirm we have recovered lost customer data.

We have a moral and, in more than 20 states, a legal obligation to report these findings to law enforcement. We share this policy with our customers in writing before we begin any repair.

As a company, we have not sought or received training from law enforcement in how to search for child pornography. Our policies prohibit employees from doing anything other than what is necessary to solve the customer’s problem. In the wake of these allegations, we have redoubled our efforts to train employees on what to do — and not do — in these circumstances.

We have learned that four employees may have received payment after turning over alleged child pornography to the FBI. Any decision to accept payment was in very poor judgement and inconsistent with our training and policies. Three of these employees are no longer with the company and the fourth has been reprimanded and reassigned.”

Suspending Your Rights to Get Your Computer Repaired

As Best Buy noted above, “We share this policy with our customers in writing before we begin any repair.” Yes, the material customers are given when submitting their device for repair contains a sentence the says any child pornography discovered is turned over to authorities. But the EFF suggests that the customer may not understand that they are suspending their Fourth Amendment Rights when they are seeking a computer repair from Geek Squad employees acting as investigative agents of the FBI.

The EFF is being stonewalled by the FBI, who is refusing to turn over much of the information the organization has requested as part of a Freedom of Information Act (FOIA) lawsuit. EFF is taking the FBI to court later this year to deepen their investigation.

See more from the EFF at this link…

WiSA Technologies, Inc. (NASDAQ: WISA) has been on a wild and rocky ride over … END_OF_DOCUMENT_TOKEN_TO_BE_REPLACED