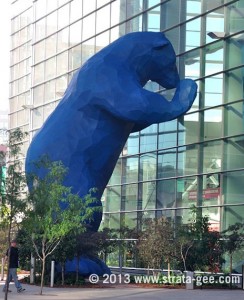 CEDIA’s Expo in 2013 returned to Denver, CO, a favorite location for many attendees and exhibitors – a point to which we can attest as so many said so in Strata-gee’s CEDIA Survey over the last few years. So was Denver the panacea needed to get everyone back into a positive state of mind? Was the show everything everyone hoped it would be?

Despite their best efforts, with one issue, CEDIA can never win. And that issue is selecting the location. Three years ago, CEDIA made the logical – but ultimately disastrous – decision to move the event to Atlanta. The dissatisfaction level with the convention facility and hotel arrangements in Atlanta…was off the charts. So much so that the organization abruptly shifted course, first moving back to Indianapolis (their home turf) before they could arrange to move back into Denver…apparently a group favorite.

But not everyone was happy with this choice. Many reps and distributors from areas east of the Mississippi told us their dealer attendance was at an all-time low for this event. However, many west coast-based organizations told us that they were finally seeing greater participation from their regions.

Our unscientific, on-the-floor survey on attendance… 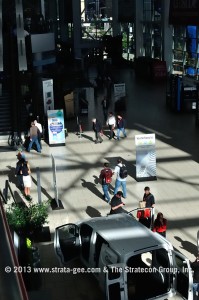 This is how the lobby looked at 10:45AM on opening day. By then most were in the convention center. (Click to enlarge)

At the event, our normal (and very unscientific) survey of attendees and exhibitors who are asked to give us their best estimate of attendance versus the previous year suggested a more optimistic reaction or guess. In the last two years, our results were approximately 80/20, decline in attendance to increase in attendance (and we now know that both years showed declines in attendance).

It is really difficult to look at the floor and make an estimate of the number of attendees. This is doubly tough when the venue and market have changed. Even so, this year, there was a perceptible shift in the estimates – coming closer to more like 60/40 – decline to growth. In fact, part way through the show, I would have said it was more like 50/50.

At the show, CEDIA staff and executives demonstrated visible confidence in advance of the official attendance announcement. They would clearly be poor poker players. But it is not unusual for trade show executives to feign success – sometimes even in the face of obvious adversity. So we weren’t sure as to the sway of the numbers. 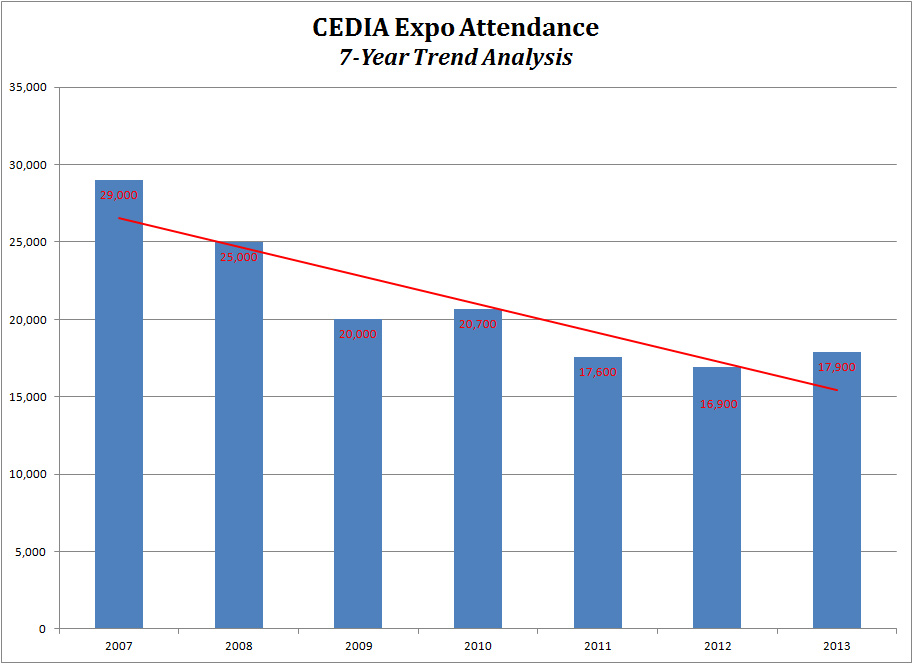 This chart shows Expo attendance by year. The red line is a calculated trend-line over time. 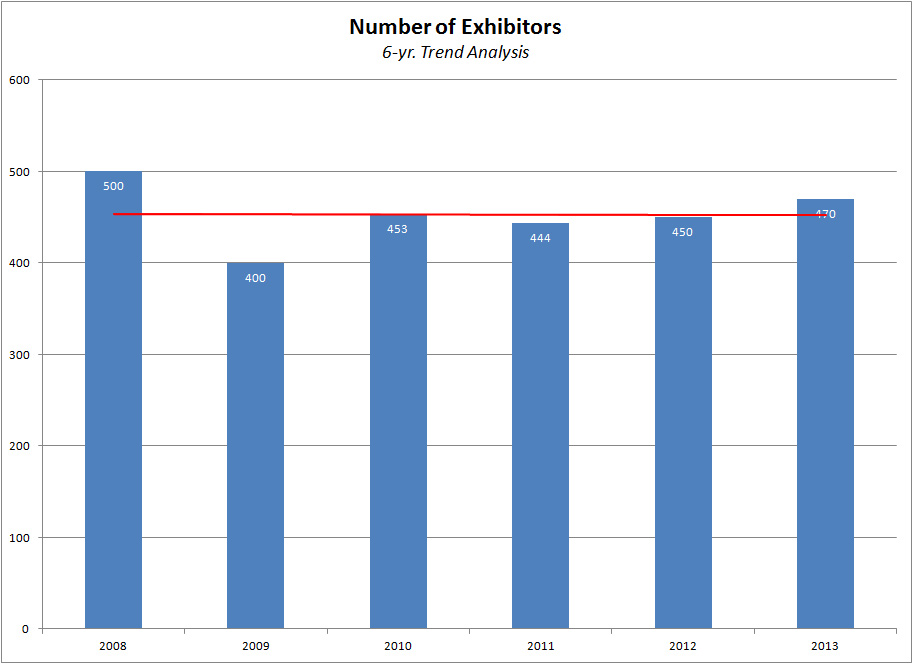 So is it “happy days are here again?” Is the [economic] war over…has CEDIA won?…

As any statistician can tell you, one year does not make a trend. We need to see continued growth of the show over time to tell whether this is really substantive growth – or just an anomaly from changing markets and times (the show was much later in the month as compared to past years). Keep in mind, we saw an increase in both attendance and exhibitors in 2010…only to see them drop substantially the following year.

It is also important to keep things in their proper context. The attendance level this year of 17,900 is only 1.7% better than two years ago in Indianapolis…and only a little over 4% better than the 17,200 attendees we saw way back in 2001 – twelve years ago! 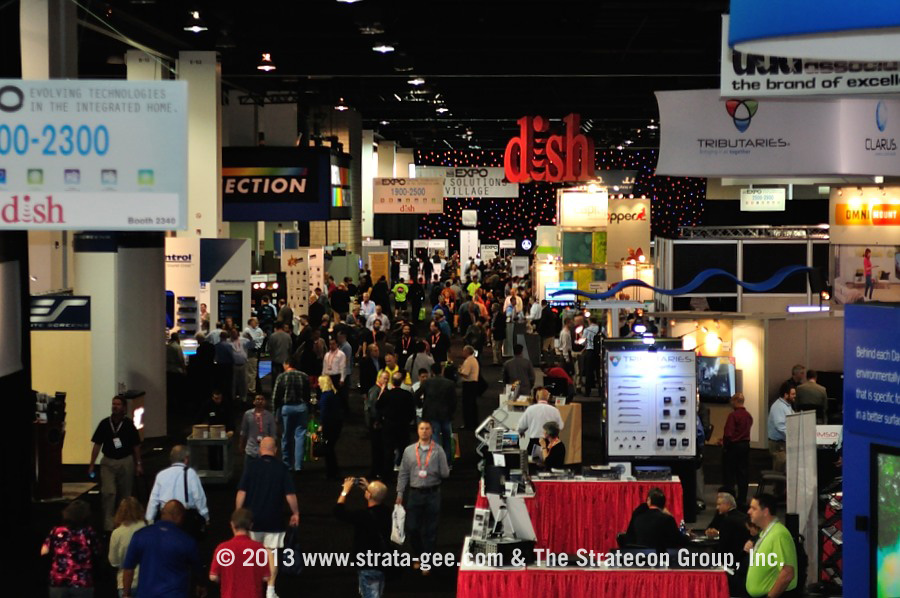 This is how one of the main aisles looked mid-day of the first day. (Click to enlarge)

In addition to these factors, we still see troubling trends – such as a dearth of major video exhibitors…once a big factor in this show. The American market is a video-oriented market – and our industry is no exception. For many consumers, the video set-up is the most important part of the system.

Yes, JVC was there (primarily showing a very impressive line of front projectors). Yes, Sony was there (primarily showing 4K Ultra HDTV and Hi-Rez audio). But the 800-lb. gorilla of CE…Samsung…was not. Nor was their favorite sparring partner…LG, or any other major video brand. As long as the show is meant to reflect the systems we’re installing in clients’ homes, video suppliers most definitely need to have a place at the table. 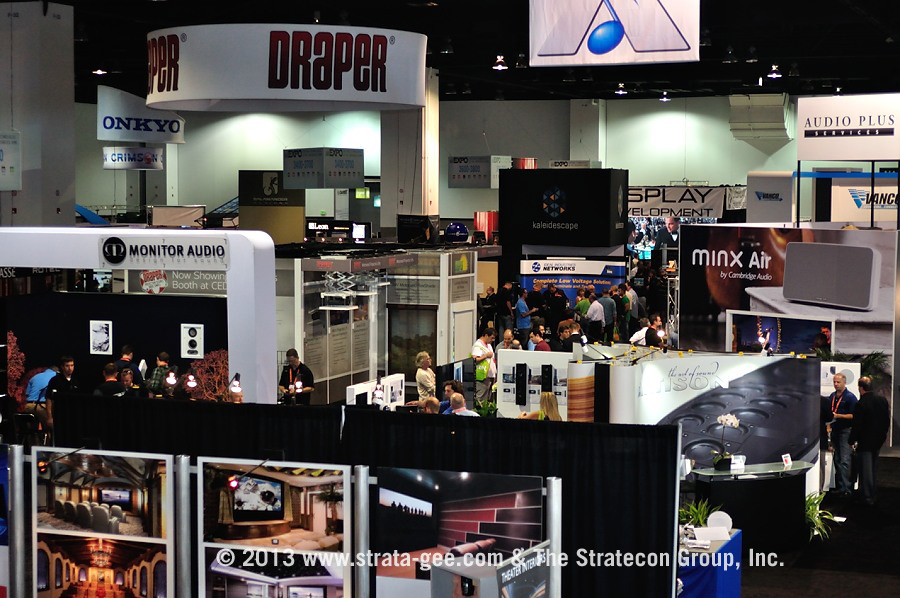 Part of the problem is the timing of this event which is typically held well after new product lines roll out – normally in a late Spring/early Summer time frame. But also – with a couple of exceptions – most of the new products shown were more evolutionary, than revolutionary.

To be more significant…

For the show to take on any particular significance – it would hep immensely if they could get a series of revolutionary product launches at the show. But given the state of the industry…that may be asking too much.

At the end of the day – an increase in attendance is a good thing. And it may truly represent a stopping of the bleeding after five years of attendance declines. But we don’t know for sure yet if this is the case. 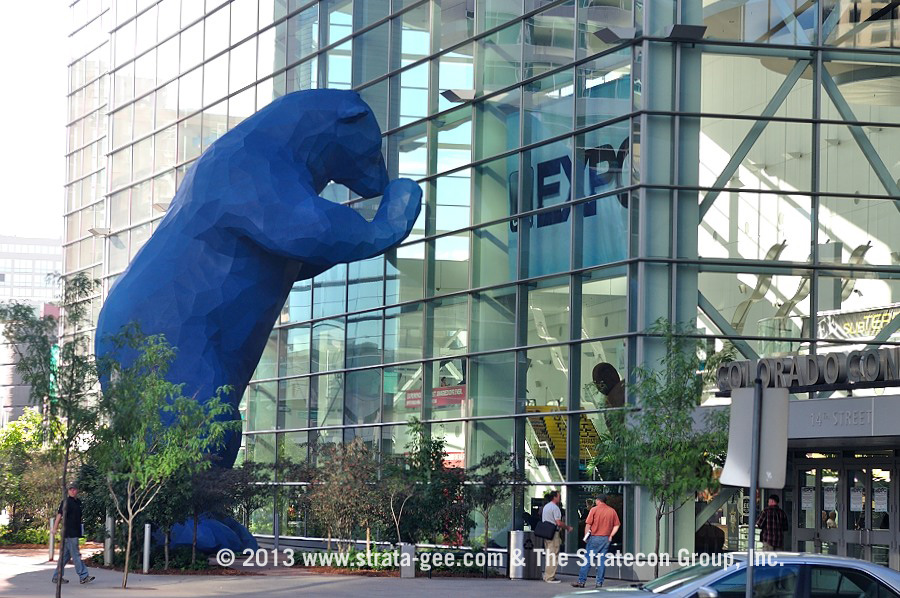 Full picture of front of the Colorado Convention Center

So CEDIA must continue to spare no effort to continue to build this show. According to their report, the number of new attendees grew by 50%. Also, the number of attendees participating in training also increased 50%. Taken together, theses facts could be – let me emphasize COULD BE – the first signs of new industry growth.

Hopefully, CEDIA will continue to explore new ways to continue to add more value to Expo – for the benefit of attendees, exhibitors…and the industry.