Audio Associates President Michael Lefkowits told us that based on early registrations, the event will draw almost 200 attendees representing nearly as many dealers and custom installers from around their territory. And these attendees will be treated to product displays, demonstrations, specials, door prizes, and training meetings from many of the 23 participating vendors. 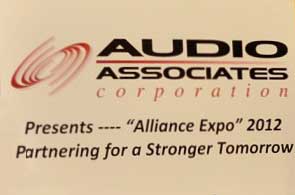 A new venue for this annual event, the Doubletree Hotel was a nice – and upgraded – change of pace as compared to previous years. Especially nice, thanks to the larger size of the convention center, Audio Associates was able to centrally locate the entire event on the third floor, creating their own center of the universe for the two-day event. The Expo was mostly based in a large center hall ringed with vendor display tables and where food and beverages were served. This center hall was surrounded by separate demonstration rooms providing select vendors with the opportunity to perform live, full-volume demos of their products.

Large displays from Monster, D&M Holdings, and various Harman brands lined the walls of the main hall which not only provided meals, but also offered a central social center for attendees, guests, and vendors to mingle and chat. It also served as a sort of boiler room where Audio Associates sales staff deftly worked out deals with dealers at the ever-present tables.

D&M showed their newest Denon and Marantz receiver lines, products that launched literally within the last couple of weeks. And Monster showed some new prototype products – including wireless products that reinforce the motivation for the company to drop the “Cable” from their name – sure to get the attention of the many present retailers from the largest retail market in the country.

The atmosphere was definitely more upbeat than in previous year’s events. Perhaps this improvement was due to the obviously greater attendance, or perhaps it’s a reflection of a new “roll up our sleeves and get to work” reality of the continuously consolidating specialty segment. No matter which, booths were busy, training sessions were full, and there was a constant “buzz” in the central hall as multiple groups of people conversed about product details, order quantities, etc.

Events like the Alliance Expo require a lot of work, and a lot of money, to succeed. And while in the past almost every rep firm used to promote events such as this – they are becoming increasingly rare. But several dealers in attendance told us that this type of event is crucial to them. Not only is a local dealer show more affordable to attend…affordable in terms of dollars spent to attend a show and – more importantly – in time spent away from their businesses…they are more focused on the products the dealers are selling in their markets.

The Alliance Expo 2012, Partnering for a Stronger Tomorrow, wraps up Wednesday.