You are here: Home / Brands / How Secure Would You Feel if You Could Remotely See 720-Degrees?

IC Realtime, a manufacturer of  video surveillance gear, showed their new IC720 remote viewing platform that can “see” a fully seamless 720º with no blind spots. It is a remarkable capability which basically opens up the whole world to be viewed remotely with the ability to look up, down, and all  around and see…everything.

See more on this remarkable development…

When we first heard about IC Realtime’s new IC720, the first camera that lets you see a full 720°, we weren’t quite sure how that was even possible. Not only that, but thanks to amazing software design, a video image can be streamed quickly and smoothly. How quickly? How about at over 100MPH?

IC Realtime designed a clever system that relies not only on game-changing hardware – but couples it with software to create a comprehensive solution with a variety of uses…including security. To test the technology, the company has mounted its IC720 on a race car and literally streamed a live, hair-raising image to remote viewers at the track.

In creating the IC720, the company took two 360° camera modules and placed them in a custom case – placed back to back. Then company engineers, in essence, stitched the edges of the two 360° images with sophisticated algorithms that perfectly synchronizes the respective images. The result is a fully global image in which the viewer can see any which way they’d like to look…the full global picture at their fingertips.

IC Realtime partnered with team Scuderia Corsa Racing placing the small spherical camera atop a short post on top of their Ferrari 458 Italia No. 63 car. This car, IC Realtime says is currently competing on the America circuit and actually won the championship last year.

At last week’s CEDIA, Andrew Nassar, General Manager for IC Realtime, wowed us with a demonstration of the IC720’s capability using a recorded version of a race car running around a track. (And yes, the full 720° image is recorded for the same-as-live experience.) The result was nothing short of stunning.

First and foremost, the picture was very clear with good color depth and smooth rendering. The 360° x 360° image feels lifelike and almost looks 3D. Quite frankly, those with motion sickness sensitivity may get some twinges because you literally feel as though you are riding in the race car speeding around the track.

There’s an App for that… 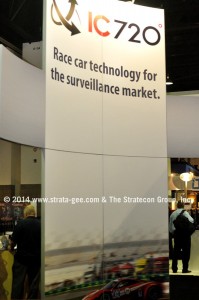 Nassar showed us how the available App uses the iPad’s gyroscopic and accelerometer  sensors – you can control the visual by physically moving the iPad. You quickly get the hang of changing the view to whatever you want to see by simple manipulation of the iPad.

In live use, the image from the camera on the racing car is streamed live to mobile devices around the track. At the moment, Scuderia Corsa Racing uses the camera on practice runs to critique various driving and track strategies. However, in the future, the team may use the camera during actual racing.

IC Realtime is still testing the IC720 for security applications. However the line includes other modules and sensors. Nassar told us the single 360° sensor placed flat against the wall is likely to be the most useful for surveillance purposes. Simply place one up against an exterior or interior wall, and you have a clear and dramatic 360° view…perfect for most businesses.

Learn more about IC Realtime and their IC720 project at www.icrealtime.com.

I hope everyone has a HAPPY 4TH OF JULY with lots of family, frisbees, hot dogs … END_OF_DOCUMENT_TOKEN_TO_BE_REPLACED