You are here: Home / Brands / With Pyng, Crestron Zings the Integration Community

But does Pyng’s ease of programming & use cut the integrator out of the picture? See more…

App interfaces for complex control systems have existed for quite some time now. But these apps are nothing more than a de-featured access point to a intricate control systems are usually programmed via a complicated process via a laptop or some other computer with a series of often arcane control commands that require a talented programmer to create and compile.

Pyng is different. More along the lines of an Internet-of-Things (IoT) concept, Crestron – one of the top control companies in the business known for its high-end sophisticated systems – has done an end run around other nondescript IoT companies by creating Pyng, which uses a simple hub to connect all types of wireless sensors and touchpads for easy set-up and control via your iPad. The user will have full control over configuration including the ability to set scenes and events…with set-up a snap. 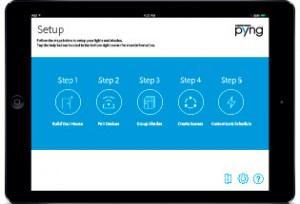 The company says users can easily program and control: access (with, for example, Yale wireless door locks), thermostats, wireless lighting controls, switches, motorized drapes and shades, and more – all through the Pyng hub with infiNET EX communications. The system can accommodate up to 200 infiNET EX accessories. And the app is free.

It’s all about point and click. The company says the user can simply “Build their house” through a simple five-step process. Even easier than a Wizard, the company has included pre-configured “default” screens and options, to quickly get the user to a starting point. For some, this will be all they need. But for other more adventurous types, simply point and click to customize for your individual system and requirements.

Putting Pyng through its paces…

At a special press preview in Crestron’s booth before the show opened, Crestron’s Evan Ackmann put Pyng through its paces on a giant recreation of an iPad hung on the wall of the booth. He quickly picked a few rooms to set up “our” house, paired devices, created groups, set up scenes and put together a reasonable schedule of events. It was all click…click…click and done in literally just a few minutes. All the while, he was explaining his actions, testing his settings – lights went on/off, shades went up/down – made custom alterations. Ackmann made it look like child’s play.

The simplicity was indeed surprising to those of us in the press. But the stunning simplicity of the system begs a question: Is Crestron trying to cut the integrator out of the equation? Okay, maybe it begs two questions: Pyng is so easy to set-up and configure – why would an end-user need an integrator?

Is Pyng so simple the integrator is no longer needed?…

Crestron employees say emphatically that cutting the integrator out of the process was not the point of designing such a system. Rather, the company is trying to expand the market for home automation by developing a system that is both more affordable and more approachable – to an audience that would likely not be a customer of the typical integrator.

Not only that, but as one Crestron rep told us, they expect many of the purchasers of the Pyng system to still call upon a custom integrator to – at the very least – do the initial set-up and configuration. Why? Even though Pyng is much simpler than the typical sophisticated home control and automation system – it still may beyond the capabilities…or the D-I-Y proclivity…of a large swath of this larger customer base.

Creston had no choice…

Well, maybe. But with easily accessible help screens, simple self-test routines, and idiot-proof design…this product could end up being in high demand for the D-I-Y crowd.

Still Crestron likely had no choice when considering entering this new market segment. Many players are entering the scene offering IoT solutions promising to bring home automation to the masses. Companies like Plum, Smart Things, TiO – and many, many more – are bursting on the scene doing just that. And while they may all be small at the moment – if they are successful, they could potentially take a huge share of the market.

And these IoT companies probably never expected such a smart – and easy – system such as Pyng from one of the industry’s old guard control companies.

We heard mixed feelings from some of the integrators at CEDIA Expo about Pyng. Some found it troubling and wanted to speak with their Crestron rep to understand where the company was going with this line. But in truth, we heard more positive comments than negative. Crestron has built up a strong reputation for being integrator-friendly.

And that reputation has bought Crestron the “benefit of the doubt” from many of their integrators.

Snap One (NASDAQ: SNPO), a major player in the custom integration/smart home … END_OF_DOCUMENT_TOKEN_TO_BE_REPLACED