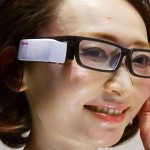 Toshiba Corp. has pulled the plug on a highly-touted smart glasses project – a product similar in concept to the recently cancelled consumer version of Google Glass. What’s most interesting about this decision by Toshiba is that they made it just days before the originally scheduled – and loudly promoted – launch date.

Tokyo, Japan-based Toshiba Corp. had announced their Wearvue smart glasses project some time ago, causing quite a buzz in Japan. Basically, Wearvue is a Japanese version of Google Glass and like it, projects a display visible only to the wearer. But unlike Google Glass, which had originally been conceived as a consumer product, Toshiba had always targeted Wearvue for the corporate market.

Toshiba’s Wearvue was not exactly a direct knock-off of Google Glass, the company had definitely sought to engineer a better solution. Eschewing the cosmic spacey look of Google Glass, Wearvue has a much more conventional looking design. Also, Wearvue was said to be much lighter and more comfortable to wear over longer periods of time.

A few weeks ago, Google appeared to have pulled the plug on Google Glass, with all of their social media sites going dark. Even so, there is evidence that Google still intends to market a version of Google Glass to the corporate and enterprise markets – the same markets that Toshiba had targeted all along.

Toshiba had announced that they planned to launch Wearvue February 29th. Not only that, but the company mounted an impressive blitz campaign for the product just last month at the Wearable Expo in Tokyo. As far as anyone knew, it was all systems go…until this Monday when the company announced it was cancelling the product.

Almost exactly one week prior to launch, Toshiba said it had to cancel the product as part of its efforts to streamline its business portfolio. Toshiba, which one report in Japan called “cash strapped,” is struggling in the wake of one of the largest accounting scandals in Japan’s history.

And one more casualty of this accounting scandal appears to be…Wearvue.