<January 4, 2012> Next week, the International Consumer Electronics Show kicks off in Las Vegas, NV starting January 10 and running through the 13th at the Las Vegas Convention Center. Over the last few years, many ALERT and BEACON readers have indicated to me that they no longer attended the event as they feel the show is no longer targeted at the specialty side of the business – and instead were using the CEDIA Expo as their main show.

So in December we launched a survey to find out more about our readers CES plans – whether they intended to attend or not. Yet despite our anecdotal evidence to the contrary, the survey shows that many readers do intend to take advantage of this show for a variety of reasons.

Warning, warning, warning…
Before we get into the specifics of our survey results, it would be prudent to review a few caveats. Even though our participation in this survey was substantially higher than previous ones, we still have a relatively small sample. And any statistician can tell you a small sample means a higher likelihood of errors.

Also, keep in mind that there is a built-in bias in surveys that tends to favor positive responses – people who have made the commitment to attend tend to be more likely to want to participate in surveys as opposed to those who are not attending and, therefore, do not care about CES.

Also, some statisticians talk about how people who respond to surveys are subconsciously trying to influence others to take the same action – so they can feel better about their decision.

Skew control…
Finally, we should mention that results can be skewed by the makeup of our BEACON readership. As many of you undoubtedly know, while we service a large variety of business types, our readership tends to be skewed more towards upper management of industry brands/manufacturers/distributors. Our readers also tend to be more oriented towards the specialty side of the business, as opposed to general or low-end goods.

All of this means to take these results with a heavy grain of salt. Still, we believe that it is fair to say that there were some interesting data uncovered. We will also share with you a sampling of the ample comments we received in the many write-in boxes we provided.

Thanks for sharing…and caring…
We want to thank all of those who took time out from their busy schedules to take this survey and share their thoughts on the key industry event. While we tried to keep it short and fast to take, it still required initiative on the survey takers part to find the time to do so. THANK YOU!!

First interesting data point, 90.2% of those who started the survey…finished it.

Should you stay or should you go?…
In question #1, respondents were asked simply to state whether they were attending or not. The structure of the answer also allowed respondents to indicate certain circumstances of their status. So, for example, they could say whether they were intending to go to the show…and if this was the first time – or rather if they always attend. 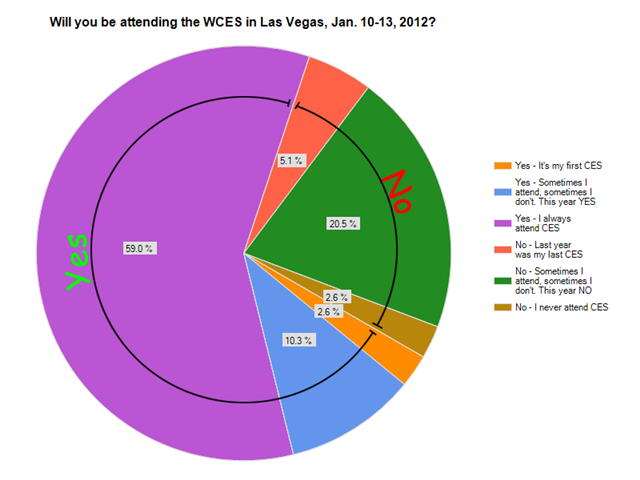 A convincing number – just under 72% of respondents – said they were attending. Of this number, fully 59% said “Yes-I always attend CES.” Fewer, about 10%, said “Yes-Sometimes I attend, sometimes I don’t. This year YES.” Finally, a small number, about 2.6% indicated that this will be their first CES.

Not going or showing…
On the other side of the coin, just over 28% indicated that they did not plan to attend CES this year. The largest number, just over 20%, said that “No-Sometimes I attend, sometimes I don’t. This year NO.” A little over 5% said that last year was their last CES. And finally, almost 3% say  they never attend CES. 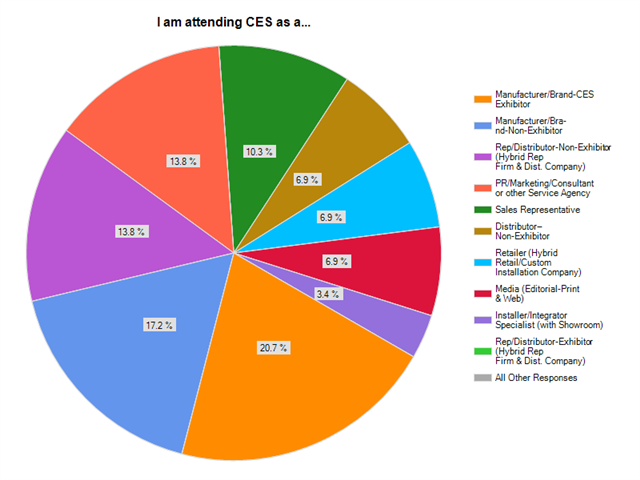 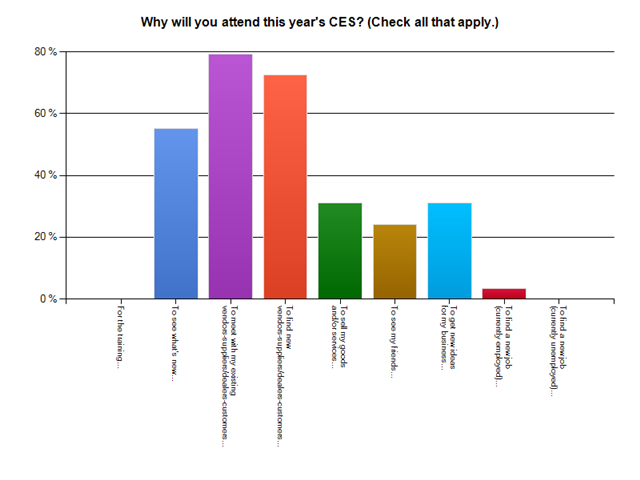 The motivation to attend for more than 55% of respondents was “To see what’s new.” A little over 3% of respondents said that they were there “To find a new job (currently employed).” Interestingly, only 31% said they were going “To sell my goods and/or services.”

Although we provided write-in space, no one suggested reasons other than those we provided.

Why not?…
On the other side of the scale, we asked respondents who said they would not be attending CES the main reasons why they chose not to go. Although we offered  six options such as “I can’t afford to spend the time to attend,” and “I can’t get away from my business right now,” only three options were selected by all of the non-attending respondents. 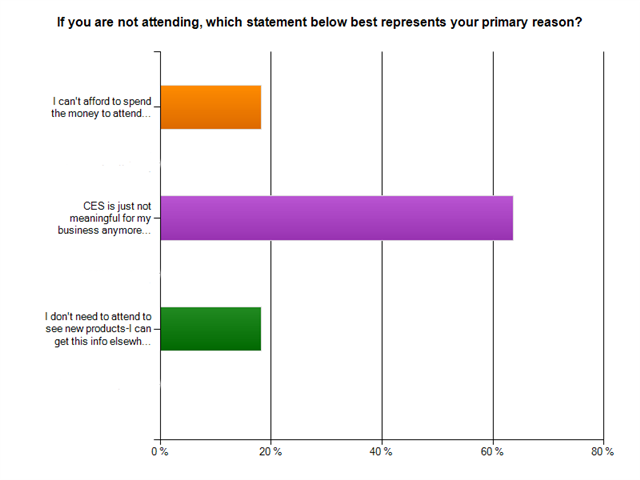 And of all of the possible reasons to not attend CES, almost 64% of respondents said “CES is just not meaningful for my business anymore.” The other two reasons chosen by a little over 18% of respondents each were “I can’t afford to spend the money to attend,” and “I don’t need to attend to see new products-I can get this info elsewhere.”

There was one other reason written in, “fewer [sic] major consumer electronic companies are attending; CES seems to be more about fringe technologies like wearables, nanotechnology, etc.”

Yes, no, maybe so…
We then asked all respondents, “How important is the CES to you and your business?” Almost everyone answered this question and we got a broad range of responses, as you might imagine. Some of the top responses were:

It’s not as important as it once was, but it is still the best event in our industry.

It is important to meet with the larger suppliers

CES is very important to my business

less and less important. Continuing a long decline. Too big and too expensive and a major lack of focus on many segments in favor of the category du jour to drive up attendence [sic] figures.

Still important but I wish it was not.

Not important because the show does nothing for technology. The show has turned into a Flea Market.

Relative to exposure on national news and buzz created by electronics.

It used to be but such a smaller percentage of the show is relevant to my store.

Important event in terms of exposure to the consuming masses. As for my business, I can get the high points from my Rep’s.

Moderately important. Saves money on China travel as all vendors are there.

Marginally, as a rep that is more Cedia-centric fewer of our manufacturers are participating, and the cost to attend from the rust belt is too high.

at this point not very important, infocom and cedia would rank far ahead of ces

less than ever. CEDIA is now primary show.

fairly important, as it is an effective way to see many customers in a short period of time. But not for writing business

Used to be #1 show many years ago. Now it’s a couple of days due to lack of factories and customers attending. Costs to attend are still high.

Reasonably important. Often it is our only opportunity to meet face-to-face with our international customers.

For me there are 2 must attend trade shows – CES & CEDIA Expo. I drove to my first LV CES while still a sales person in a stereo store. It was either 1977 or 1978. I still believe it was the best career move I ever made and I have been to every CES since. I do not understand why anyone in our industry would miss it.

How to make CES more important…
Finally, we asked respondents, “CES could be even more important to me and my business if they would…” And again, we got a wide range of interesting responses – some thoughtful, some…not so much. Top responses were:

figure out how to bring back the smaller suppliers and get them on site so we don’t have to run all over town to meet with them.

focus more on their audio roots and specialty retailers

If they would move it out of Vegas to someplace nicer that my family could enjoy.

shut down, break up into focused smaller segments

Get rid of Gary Shapiro.

Combine it with CEDIA

make it in late january

keep the public out, limit the scope of products to what was originally what ces was about. too much junk too little substance these days

If CEA got its head out of its ass. Las Vegas is a crappy city but Gary Shapiro is on the take.

Buy out the CEDIA show and combine that degree of training and vendor selection in conjunction with what already is happening at CES.

Not have it in Las Vegas

Turn back the hands of time…

get the smaller dealers to attend with lower costs for travel etc. Get all vendors on the floor v.s. off site

Get more factory participation…Lower the costs of attending (Hotels, etc)

The show has grown to the point of being “unscalable” -though I do not have any great suggestions as to how to fix that issue. As for this year, I much prefer the Thursday – Sunday format to the show being on Tuesday.

Wean out the riff raff of attendees and companies that are not consumer electronics.

draw more of my customers — CEDIA and INFOCOM integrators and resellers

Comparable rates…
Some of these responses were predictable. Over the last two weeks, the offices of the BEACON has received several complaints from attendees about hotel costs that seemed much higher this year. We contacted the CEA and they claim that the rates this year are comparable to last year’s rates – many of our readers would beg to differ.

But as you saw above, several respondents suggested a merging of CES with CEDIA. This would cause us to worry about watering down the highly focused CEDIA Expo possibly causing it to lose its focus. On the other hand, CEDIA’s Expo has suffered with a declining attendance…perhaps some form of hybrid combination could be a win-win for both shows.

Smaller shows with greater focus…
Several respondents called for smaller shows with greater focus. This might make more sense, although those of us participating in multiple categories would have to up our travel budgets. But clearly, many respondents bemoan CES’s vast range of product categories which just are not relevant to many of us in the specialty segment. Yet we have to deal with a show trying to be all things to all people.

In any event, I want to thank all of the respondents for their thoughtful participation. There are some good ideas in there – are you listening Gary Shapiro?

By now, data clearly shows that vinyl record sales here in the U.S. have been … END_OF_DOCUMENT_TOKEN_TO_BE_REPLACED