You are here: Home / Manufacturers / NuVo Moves Beyond Integrators with New Wireless System Launched at CES 2013 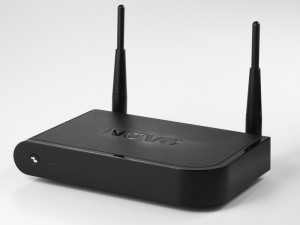 NuVo Technologies, a darling of the custom integration industry, has launched a new wireless system that it intends to market for self-installation by consumers – bypassing integrators and installers altogether. The new system is being shown at CES 2013 and the company claims its so easy to set up that “just about anyone can.”

Learn more about this surprising new system from NuVo…

Called simply the NuVo Wireless Audio System, the company says it is the world’s “simplest yet most advanced system for multi-room, multi-stream wireless music.” The Wireless Audio System (WAS) is said to be the first wireless system for the home based on advanced, dual-band WiFi and MIMO technologies that allow for up to 16 simultaneous streams at 600 kb per second each. Nuvo says this is the highest transmission rate of any WiFi music system.

NuVo’s WAS connects to the Internet via the consumers home network and can play their iTunes and Windows Media libraries, as well as popular Internet apps such as Pandora, Rhapsody, SiriusSM and other network-connected music and audio sources.

The NuVo system is basically a two-piece system: a GW100 network gateway, and a music player of which the company is offering two versions, the P100 and P200. Users can simply use their smartphone or tablet to control the system via the iOS or Android apps available for free.

While the company has made the system very simple to set up and use, that capability was not provided at the expense of flexibility. Much like wired systems, the WAS offers grouping of zones, audio synchronization between zones, independent zone control, and other features. The WAS even offers input via Bluetooth, USA or audio cable.

“For all of its simplicity, the NuVo system is without question the closest to an audiophile-grade product of any whole home music system based on WiFi technology,” David Rodarte, Vice President and General Manager of NuVo said in a prepared statement. “No existing wireless product can deliver as many simultaneous streams with as much bandwidth – a full 600 KB – for each stream. We believe the NuVo Wireless Audio System is the simplest yet most advanced system for multi9-room, multi-stream wireless music, and offers an unmatched level of audio quality.”

Simplicity is the ultimate sophistication…

Key to user satisfaction, NuVo has gone to great lengths to keep system setup incredibly simple. The consumer simply downloads the wireless control app, plugs in the GW100 to their home router, and when powered up – the app on their phone or tablet launches a wizard to walk them through a simple 3-step process. NuVo says there is another simple wizard for when the consumer seeks to expand the system at a later date.

The P200 or P100 wireless music players define the zones with one used in each zone the consumer seeks to have music available in.The two players both use efficient digital amplifiers and provide a 5-way binding post to connect a speaker – speakers are not included with the system.

The P100 provides 20 watts per channel (2 channels @ 8 ohms) and the step-up P200 has 60 watts per channel. The P200 also features additional upgraded technology with aptX Bluetooth built in to provide for direct streaming from a smartphone or tablet.

According to NuVo, the range between the gateway to the music players is approximately 300 ft. – more than enough for the typical American home. However, the range can be extended through the use of additional gateways.

The players support all of the common audio formats including MP3, WMA, ACC, FLAC, and WAV. The players also support various Internet radio streams as we previously mentioned. Each music player also includes a USB 2.0 port so that consumers can play music directly from a thumb drive or hard drive.

Don’t get in line to buy a WAS, get online…

Consumers can purchase the NuVo Wireless Audio System online from SMARTHOME, Inc. at www.smarthome.com…and from Parts Express at www.partsexpress.com. The gateway/P100/P200 gave MSRPs of $199/$479/$599, respectively.

A Fluke? Or is Housing Making a Comeback? Data released on Friday by the U.S. … END_OF_DOCUMENT_TOKEN_TO_BE_REPLACED