You are here: Home / Management / Can This Man Redefine A/V Specialty Retail? 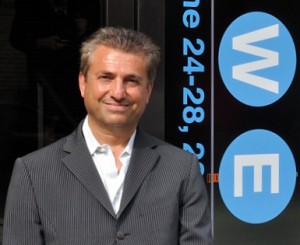 It’s been quite a ride for New Jersey’s Electronics Expo over the last year or so. Once riding high as one of the fastest growing New Jersey electronics retailers, the company has struggled with the changing economy, changing industry, bankruptcy, and recovery. It’s been a wild ride and founder Leon Temiz says he is committed to crafting a new type of specialty retail business.

Temiz seemed calmly confident as he reviewed for us the twists and turns of his tale that led up to a dramatic series of events including a descent into bankruptcy – and then an almost miraculous exit from bankruptcy with a new business plan and new support from banks and creditors.

For any of this to take place, however, Temiz acknowledged that first, he had to do a fair amount of soul-searching before he reached a point where he was ready to commit to moving the company in a new direction.

“I could have walked away,” Temiz told us in an interview outside of the CEWeek show. “I asked myself, ‘Do you want to be in this business?'”

Walking away was an option…

Telling us that he had done well over the years, including investing in significant real estate holdings, Temiz indicated that walking away…was a real option for him. The path forward was not obvious and success was contingent on several independent variables coming together…not all of which were in his control.”

Electronics Expo was an aggressive promoter, but manufacturers’ Minimum Advertised Price (MAP) and Universal Pricing Programs (UPP) began to impact the effectiveness of their promotions. Also, according to the filing, many manufacturers began restricting sales to third-party websites such as Amazon.com, an important partner for Electronics Expo.

On top of all of this, as video manufacturers began to have their own profitability problems – support for dealer promotions dried up – further exacerbating the slide of Electronics Expo revenues. Dramatic industry changes were afoot – and some retailers were on the front lines of the battle.

“The industry is ill,” Temiz told us, explaining how the industry is reacting to serious problems by trying untested solutions. “There’s a chemical imbalance – and the industry is trying different medicines to see what is going to work.”

It quickly became clear that the company would need to make dramatic changes. Like many retailers, Electronics Expo offered their customers a complete one-stop-shop solution by carrying a wide range of electronics categories. The idea was to sell any kind of electronic gadget the public wanted.

But as the overall industry began to slow down, some of those categories became unprofitable as they required large amounts of inventory…but now with slowing turnover. And it took large-format stores to house such large assortments of products – and large-format stores are costly.

Electronics Expo implemented a major restructuring project – closing locations and laying off staff. (See our report: Did Vendors Force Electronics Expo into Bankruptcy?) They began to refocus their merchandising strategy to move away from promotional items and center on more profitable products.

Temiz maintains that he did all he could to keep vendors in the loop – explaining to them the major transformation under way and some of the short-term ramifications of that. However, managing inventories was a significant challenge and cash flow was just getting unworkable. Eventually, the situation hit a turning point when a major credit insurance agency refused to insure Electronics Expo debt for manufacturers.

Five things HAD to happen…

Ultimately, the company was forced to seek the protection of the court by filing bankruptcy. Temiz and his team at Electronics Expo felt that they knew what needed to be done. The format needed to be completely revamped.

The pieces come together…

Fortunately for Temiz, all the pieces came together and he was able to buy the company out of bankruptcy for approximately $1.5 million along with the assumption of certain liabilities. Temiz tells us that he received the support of his bank and at least 40 vendors who reestablished open credit lines for the company.

Now comes the hard work of completing the transformation. Temiz says that the industry fundamentals today suggests a smaller format store is the better option. The new Electronics Expo design would be around 4,000 sq.ft., substantially smaller than their previous 10,000+sq.ft. designs.

With smaller stores, merchandise strategies need to change. Product categories would be scaled back dramatically…or eliminated altogether. They will, for example, walk away from point-and-shoot cameras and camcorders. In the categories that they do plan to go forward with, the company will carry only the top models in key categories offering solid profitability.

While Electronics Expo plans to continue with their website – they will dramatically reduce their reliance on it as a primary revenue generator. At one time, Temiz told us, fully 20%-25% of their entire online business was comprised of low margin televisions. Now they will seek to de-emphasize their reliance on televisions, carefully choosing models that offer profitability. Ironically, Electronics Expo is now in a position to benefit from the manufacturers MAP and UPP programs providing market and pricing stability.

Get the buyers near the floor…

Temiz told us that he has moved the buying offices directly over their current retail showroom. This was done deliberately to make sure his merchandising team stays closely in touch with what is happening on the retail floor and with consumer demand.

The company will adopt new strategies, Temiz adds. For example, they will carefully choose their assortment to step around the Amazon.coms and other big guys and avoid the ‘race to zero.’

Finally, Temiz says the company will emphasize their custom installation department. He also envisions the creation of other services  – both to provide something consumers can’t get from other retailers, and to help drive additional profitability from system sales.

We asked Temiz how many retail locations he was targeting to launch. He answered without hesitation, and honestly we think, “I don’t know.” His focus, he tells us, is on executing this new plan and achieving sustainable profitability. Sometime down the road he can revisit the issue of store count.

Perhaps his response to that last question is the best indication of Temiz’s changed perspective in thinking about his Electronics Expo business: careful execution (profit) vs. unrestrained growth (revenues). We’re pretty confident that a few years ago Temiz, like many retailers, would have answered that question differently.

A Fluke? Or is Housing Making a Comeback? Data released on Friday by the U.S. … END_OF_DOCUMENT_TOKEN_TO_BE_REPLACED