The email was from Richard E. Campbell, whose title is Chief Revenue Officer of Bowers & Wilkins. Campbell is new to the company and we could find no information about him or his background anywhere on B&W’s website. There has been, to our knowledge, no press release from the company announcing his arrival. But sources tell us Campbell arrived very recently…within the last few days.

It appears he may be Henderson’s replacement, noting in his email that “Doug’s team will report to me as we manage through this transition to ensure continuity for our business.”

The closest we get to any explanation of Henderson’s dismissal in the email is in the following section:

“As you all have had to evolve your businesses to meet the increasingly complex demands of the market, Bowers & Wilkins needs to do the same…We are announcing that Doug Henderson, President of the business in North America, is leaving the organization to pursue other interests.”

Are You Getting on the Bus? 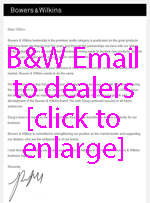 The big question, raised by the email, is what is Bowers & Wilkins evolving towards – and what does Campbell bring to the equation. Clearly, the company felt the need to make a change, but what precisely is it that they feel needs to change?

If Bowers & Wilkins wants dealers to stay on the bus, they need to say where it is heading, so that dealers can decide if they want to go there.

See the full dealer email by clicking on the image on the right.

That an exposition company lost money in 2020 is not surprising. That an … END_OF_DOCUMENT_TOKEN_TO_BE_REPLACED