Toshiba Corp. has launched an aggressive strategy aimed at turning around its troubled, money-losing television manufacturing business. We wrote last week about their decision to close a manufacturing plant in China in a bid to restructure their production base – one part of a larger TV turnaround strategy. Now word comes of additional aggressive moves by the company attempting to return their once vaunted TV business to profitability.

Toshiba plans to cut factories, jobs, and even countries as it tries for a turnaround…

Toshiba is well known in the United States as a top supplier of quality television products with, at one time, major market share. But now, like many of its fellow TV manufacturing colleagues in Japan, Toshiba is struggling to deal with a deadly combination of slackening demand and low profitability…both here and around the world.

According to an analysis by the Nikkei, the company has decided to take a series of bold steps in an effort to return this once proud division to profitability. Some of these steps would have been unthinkable just a few short years ago. But Toshiba’s President has let it be known that all options are on the table. 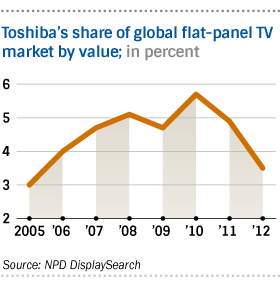 Toshiba’s television division generated an operating loss in fiscal 2012 (the year ended March 2013) of ¥50 billion ($477 million). According to unnamed sources by the Nikkei, it is believed that for the period of April to September 2013, the company has additionally lost more than ¥10 billion on an operating basis.

Data from the market research firm NPD DisplaySearch places Toshiba’s share of the global television market in terms of value at less than five percent. Even though Japanese manufacturers have finally seen some relief in the form of a more favorable currency exchange rate – Toshiba is still not seen as competitive with Korean rivals such as Samsung or LG.

Still, some are optimistic…

Yet despite these dismal numbers, Toshiba’s President and CEO Hisao Tanaka is said to be optimistic about the TV division. In commenting on the division’s ability to return to the black by the second fiscal semester of the current fiscal year (October 2013 through March 2014), Tanaka told the Nikkei, “It is possible to achieve, given the current situation.”

The company says it will ship the same 11 million units this year as it did last – but hopes to return to profitability at the same time. It will take a dramatic shift in strategy to pull off, and the company is not shying away from tough decisions. As we previously reported, the company will shut down its China manufacturing plant and move production to its larger and more efficient Indonesia plant – a factory that serves as the hub for shipments to the U.S. and Europe, as well as the rest of Asia.

Toshiba also says it will begin outsourcing the manufacturing of many of its models around the world – much of it in partnership with an unnamed Taiwanese company. The company expects that by fiscal 2014, 70% of its televisions will be made by other companies under the Toshiba nameplate.

But one decision was considered highly controversial inside the company – a decision to pull out of ten countries. Although the markets Toshiba plans to exit were not specifically identified, they are said to largely be in Latin America and other markets around the world where they are experiencing the greatest profit loss.

Sources indicated that executives at Toshiba, including senior-level executives, strongly objected to the plan to exit markets. Ultimately, it was President Tanaka himself who made this controversial decision – putting the matter to rest.

The company says it believes that it can cut ¥20 billion from its fixed costs with this plan. The company will also enforce a headcount reduction – cutting jobs at both factories and sales offices around the world.

Snap One (NASDAQ: SNPO), a major player in the custom integration/smart home … END_OF_DOCUMENT_TOKEN_TO_BE_REPLACED