You are here: Home / News / Research: Don’t Just Watch a Movie, Use Brainwaves to Alter It 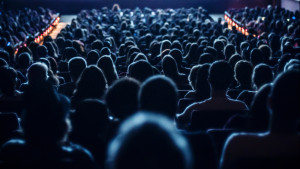 Watching movies is a serial, linear, common experience…period. No matter how great of a movie enthusiast you may be, the experience is the same for us all – you can only watch one movie at a time, and you watch it from the beginning to the end. And we all exit the theater having watched the exact same movie. But what if it didn’t have to be that way? What if our mind controlled the movie, changing the plot as it plays? Science fiction…or science fact?

A new report says that researchers are developing a technology that would allow movie viewers to use brainwaves to alter the plot line of the movie, yielding a wholly unique experience for each person experiencing that movie. To accomplish this feat requires the use of a wireless brain scanner, and an entirely different kind of filmmaking.

This wild concept is being actively researched by Richard Ramchurn a filmmaker based in Manchester, England. According to a report by Reuters, Ramchurn was inspired to create the concept after reading “In the Blink of an Eye,” a book by film editor Walter Murch in which he theorizes that the rates and rhythm of eye blinking directly correlates to the rhythm and sequence of thoughts and emotions.

This concept of a physical connection to emotions, inspired Ramchurn to try and create movies that would respond to viewers unique emotions. To test the concept of a viewer’s emotions influencing the actual content of a movie, he created a special short film using a new filmmaking technique – he titled this film, “Scanners.”

“Scanners is a film platform that uses live data from people’s brains to cut and mix a film where you have an effect loop – a two-way effect loop – whereby, watching the film you change it and it changes you,” Ramchurn told Reuters.

Viewers are fitted with a commercially available electroencephalography (EEG) headset that reads both muscular and brainwave data. The headset accurately reads Alpha, Beta, Gamma, Delta and Theta brainwaves. For this project, Ramchurn focuses on the Alpha brainwaves, which are more closely associated with creativity.

Creating the movie, however, was a substantial challenge of a different type. To accommodate differing outcomes at different parts of the movie required much more time, effort, and care in producing the movie. Ramchurn says that breaking the linear chain was very difficult and he terms the process of moving to a quantum movie production process. Essentially, the movie is created in a series of modules, with each viewers preferences driving a different path. Although “Scanners” runs only 15-minutes long, Ramchurn said that it actually required filming as much material as a typical 90-minute blockbuster movie.

The EEG headset has two primary sensors – one that sits on the forehead, and another that clips to the ear lobe. The ear lobe sensor picks up muscular data, while the forehead sensor picks up both muscular and brainwave data. A microprocessor in the headset then parses both types of data to properly identify and process each independently.

In Control of the Movie with Out-of-Control Emotions

Ramchurn told Reuters that the rhythms of the editing [by the viewer] and the pathways through the scenes depends on the mindset of the person viewing the movie. Ironically, this incredible new ability to control the movie…is largely out of the (conscious) control of the viewer, as it uses their emotions as a key element – and those are almost impossible to control.

After a series of in-house tests, Ramschurn decided to field test his setup. So he installed his very special movie theater in a mobile trailer and drove to Liverpool to create remote cinema in a park there – literally inviting passersby to step in and view “Scanners.”

“Watching other people make connections with their brain is really fascinating,” Ramchurn told Reuters. “And each time I watch someone else create the film, they make new jumps that I’ve not seen before.”

Movie Theater Owners Won’t Like It, But We Will

It seems to us that this technology has no usable value to commercial movie theater chains, set up to project linear movies to large groups of people. But it could be an incredible technology offering for your customers’ home theater setup – at least when watching alone.

Ramchurn’s system is said to be perfect for exploring people’s dreams, because it brings a person’s subconscious to the forefront – literally before their eyes.  He notes that research is being done by scientists to make detailed recordings of human dreams.

“I’m really excited that science is acknowledging that dreams actually exist and they can be measured,” Ramchurn said. “And being able to tap into that data is, for me, gives some real opportunities to tell stories or even create platforms that can communicate with people in a different way.”

But what about nightmares?