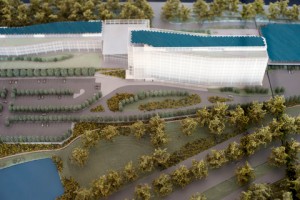 We first told you about the growing voices in opposition to the project in February, when various groups banded together to create a Protect the Palisades (PtP) organization to better organize their efforts to oppose LG, including filing an appeal of a court decision that was favorable to LG’s project. The PtP group also increased the visibility of the issue by posting billboards to educate the public on the issue both on Manhattan’s West Side Highway…and even in Las Vegas during the Consumer Electronics Show earlier this year.

At issue is whether LG should be allowed to build a headquarters structure 143-feet tall in Englewood Cliffs, NJ that would tower over a once protected wooded area of New Jersey know as the Palisades. In the past, communities in and around the Palisades enforced strict zoning ordinances limiting the height of any new construction. LG’s new facility is four-times higher than the then existing limit – and when the company initially received a zoning variance to allow such a structure, it spurred significant protests against the variance.

Instead of going back to the drawing board, LG sought, and successfully achieved a complete rewrite of Englewood Cliff’s’ zoning laws, permitting such tall structures and, under the new rules, eliminating the need for a variance.

“The planned office tower will despoil vistas protected for decades,” the Times quotes Schneiderman’s brief filed with New Jersey’s Superior Court, Appellate Division. The NY attorney general went on to say that the zoning board of Englewood Cliffs, “failed even to consider – let alone weigh – the negative impact of the planned building on the Palisades Interstate Park and the majestic views of the Palisades cliffs.”

In the initial court case brought by environmental groups seeking not to stop the project, but only to force LG to respect the beauty of the surrounding Palisades area by building in accordance with the former zoning rules created for that purpose, the lower court found that Englewood Cliffs had the legal right to grant a zoning variance. Environmentalists appealed the lower court rulings and began an aggressive campaign to gain support from other groups and the public.

LG pointed out to the Times that both the borough of Englewood Cliffs, and Bergen County executive Kathleen A. Donovan, filed briefs with the court in support of their project. LG, it seems, is unfazed by the growing opposition.

“We firmly believe that the trial court ruled properly,” LG’s John Taylor told the Times. “We’re moving ahead, as approved by the state of New Jersey, Bergen County and the borough of Englewood Cliffs, and reaffirmed by the courts.”

A level of embarrassment…

Although they don’t seem to show it, it would seem that the visible public furor over the matter wold carry some level of embarrassment for LG. After all, the company proclaims its commitment to environmental issues on its corporate website, calling itself “a leading company in practicing environmental management.”

But environmentalists claim that the company really only cares about providing a pleasing view of the local wooded environment for their corporate executives in the towering headquarters – even though it would it would spoil the view for everyone else.

In our earlier report, we noted that several New Jersey and New York politicians – including four former governors from both major political parties – have sided with the environmentalists. Also siding with the forces opposed to LG are the United States Environmental Protection Agency, the National Park Service, the Palisades Interstate Parks Commission and the editorial boards of several major newspapers.

This latest report also noted briefs in support of the environmentalists’ position from the Natural Resources Defense Council, the National Trust for Historic Preservation, the Preservation League of New York State and others.

The Times and the New York Daily News also reported that New York State parks commissioner, Rose Harvey, sent a letter on Governor Cuomo’s and her behalf urging LG to reconsider their plans. In Harvey’s letter to LG, she said that such a tall tower structure would “threaten one of the nation’s most significant natural and historic resources.”

See more about LG at www.lg.com/us.

Learn about the environmentalists’ position in this matter by visiting www.protectthepalisades.org.

Snap One (NASDAQ: SNPO), a major player in the custom integration/smart home … END_OF_DOCUMENT_TOKEN_TO_BE_REPLACED