<November 30, 2011> On Tuesday, Pioneer Corporation released its revised medium-term business plan designed to rebuild their sales and profits after a tough year of environmental and economic challenges including earthquakes and tsunamis in Japan and Thailand, as well as a global economic slowdown. The company also revised its forecast for the results of the current fiscal year ending March 31, 2012 showing a slightly better outcome than the last revised guidance offered.


The new medium-term business plan offers a glimpse into how the company’s management intends to counter challenging economic and competitive challenges – although there are some notable sections offering little more than vague and unspecified initiatives. And much of the rewritten business plan appears to simply reinforce the original business plan that results had already deviated from like a train jumping well-laid tracks.

In its discussion of how it intends to grow its existing businesses, Pioneer said that on the car electronics side, it must increase profits “sustainably.” The company intends to do this by expanding the consumer-market business as it simultaneously grows its OEM business with a balance between sales and profits. This suggests that sales growth on the OEM side may moderate as the company forgoes deferring margin to drive growth in this part of the business.

Specific opportunities for the Pioneer car electronics consumer-market business are car CD players in overseas markets and a strategy with navigation systems tailored for specific market needs. OEM opportunities will come from “strengthening relationships with major customers” and broadening the car dealer channel in emerging markets,.

The company will also engage in a strong cost cutting effort by standardizing parts which will improve efficiency and reduce man-hours in development. The plan is to increase its operating income margin from 5.5% in fiscal 2011 to 6.6% in fiscal 2014.

In the home electronics business, the company says its key challenge is to become profitable in this division. Pioneer says it plans to boost its operating income margin from 1.6% in fiscal 2011 to 4.8% in fiscal 2014 – a big swing.

To accomplish this, the company sees several opportunities, primarily in home AV products, DJ equipment, and optical discs. In home AV, Pioneer will create new markets as it did with its STEEZ portable systems targeted at the street dancer market. The company will additionally keep costs down by working with ODMs (Original Design Manufacturers).

Pioneer says it has an opportunity to expand its line-up of Blu-ray drives with both thinner and multi-layer products. The company also believes that there will be an emerging need for external disc drives to serve the expanding tablet PC market.

Pioneer says emerging markets still offer an attractive growth opportunity. In fiscal 2011, the company entered China. For fiscal 2012 the company will enter Brazil. In fiscal 2013, Pioneer will enter India, Russia, ASEAN countries, Central and South America, and the Middle East. Sounds like fiscal 2013 is going to be a particularly busy year!


Pioneer clearly recognizes that it needs to expand its business beyond just car electronics and home electronics. In fact, the plan notes that this reality is “an urgent priority.” However, to do this, the company rather vaguely states that it will “create and expand new businesses” and it will “enter and nurture new business areas.”

The company explained its plans saying it will “engage on two fronts” to “deploy two policies.” Then it added a few rather cloudy explanations included phrases such as “combining hardware and software with information services…” and “…create value not just through its hardware but also by providing total value that includes such intangible elements as software, information and services.” 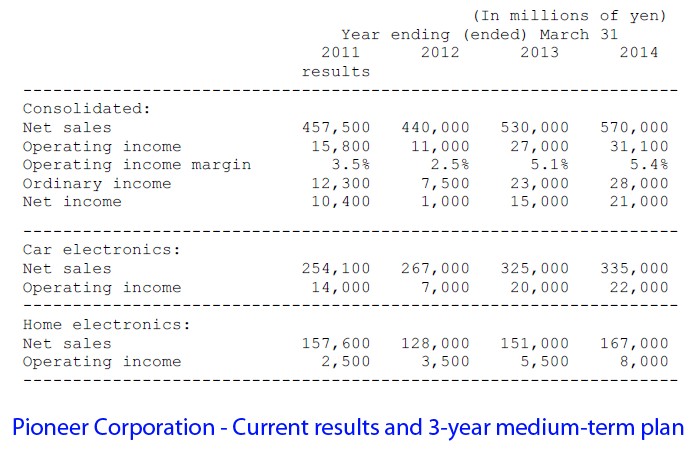 Pioneer further explained its strategy saying that in their car electronics business, they have already started a “smartphone-link car navigation business.” For the home side? The company rather cryptically said that, “…in the future it will make propositions in the Home Electronics business with original ideas.” I guess we’ll have to wait a while for those ideas to be shared.


In another interesting section of the mid-term plan, the company noted that it will create “a new music culture by fusing AV culture and different cultural sectors.” What does this mean? Pioneer refers you back to STEEZ, a sort of modern boom box with features tailored to street dancers and launched in October 2011. Thanks to STEEZ, “people can dance with their friends whenever and wherever they want.”

Rounding out the “develop new business” section, Pioneer offers some concrete examples of new markets they intend to enter including: modifying car navigation equipment to be installed on bicycles; offering electronic manufacturing services and parts/devices business to companies in Brazil; entering the OLED lighting business; entering the electric vehicles business (“for the upcoming EV era”); and entering the medical and healthcare-related devices business (which should become “massive markets in the years ahead.”)

So will this new plan work? Pioneer has made substantial headway in the Japan mobile electronics market rolling out a refreshed line of products that were well received by Japanese consumers. The market dynamics are a little different elsewhere in the world however.

Still, the details released in this medium-term business plan has some holes in it. And the assumptions of dramatically increased profit margins look a little dubious.

If at least they can get a break from Mother Nature…they may have a shot at pulling it off!