You are here: Home / General Topics / Origin’s Big News is an Enthusiastic Embrace of Dot 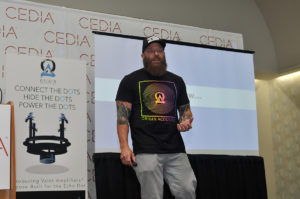 As has been the case for a couple of years now, press day – the day before the show opens, was opened by an Origin Acoustics press conference. Always a good show, Dave Donald kicked it off in his own inimitable fashion, kind of a cross between a carnival barker and a faith healer…but always with a great deal of enthusiasm.

This year, Origin had a lot to talk about.

See what Donald had to talk about…

First up, Donald told us the company had completely refreshed its Director Series, their main bread-and-butter line. Most companies, Donald claimed with his carnival barker flair, don’t update their lines “for a decade.” Well, we’re not so sure about that. But it is interesting that the company chose now to update their Director series. The “why” of the update wasn’t clearly explained. 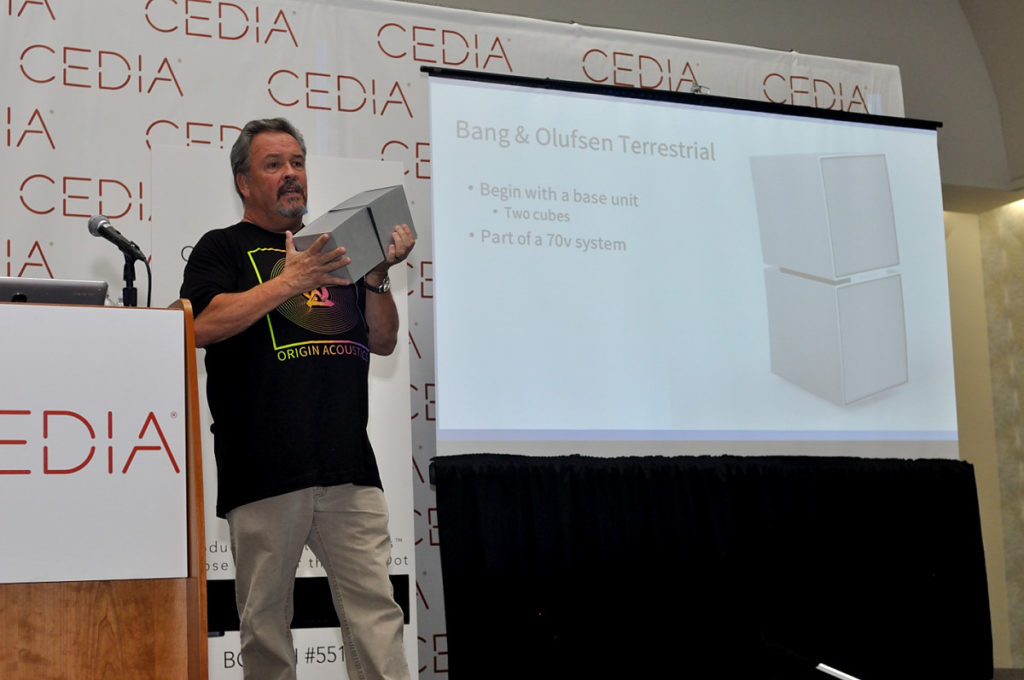 In the totally new category, Origin launched a soundbar product – in two versions. One version is the typical soundbar. The other is a soundbar in three pieces for a left, center, right. Being in three separate pieces, doesn’t sound exactly like a soundbar to us. The regular soundbar sells for $699 and the L/C/R sells for $299.

Next was a new line of in-room traditional subwoofers called Deep. The company said it borrowed from Charles and Ray Eames with a design that wraps the subwoofer in cloth, with their own weave. The subwoofers are also available in slatted wood. The subwoofers included a “mass loaded” top plate and aluminum feet. Their power comes from hybrid A/B “BASH” amplifiers.

There are three models – an 8-inch, a 10-inch, and a 12-inch size woofer with a separate passive radiator. The Deep subwoofers have power built-in of 300/600/1,000 watts. There is also a performance model with dual 12-inch powered woofers with total power of 1,200 watts.The Deep subwoofers can be tuned by an app on your smartphone.

Then, in a totally new turn, the company announced it would begin to offering a consultation service for their dealers on home theater design. The company has hired Norm Steinke as their Director of Theater Design to help dealers around the country who need assistance on theater design.

And this new service ties in with the launch of a new Marquee Collection of high-end home theater products including speakers, subwoofers and amplification. We’ll follow-up with more details on some of these series later.

The company is also partnering with B&O on a new outdoor line of speakers called B&O Terrestrial. This new Terrestrial line utilizes a line array design with the typical European design. They look like little cubes, that Donald says can be clicked together in a line array in any number up to six cubes long. The Story of The Valet and Dot

But the big news that supersedes really all of this, is the news surrounding Origins new Valet amplifiers and Amazon Dot project. You likely saw press from a “leak” last week according to company CEO Jeremy Burkhardt, but the company spent the bulk of the conference talking about it.

The Dot, Burkhardt said, he sees “…as an inflection point in our industry. If you think about all the changing dynamics – big national builders that we do business with, that our dealers do a lot of business with – are searching out relationships to eliminate our dealers. That’s a fact.”

He then says that national builders are going to Amazon seeking to form partnerships to take the Dot, “something with a ton of technology in it.” Apparently, he suggested, they are hoping to cut custom integration dealers out of the equation, or so Origin appears to think.

“We got thousands upon thousands of dealers that have already signed on and reserved to want to be part of what we are doing with Dots,” Burkhardt claimed. “So that’s beyond exciting.”

There is, Burkhardt says, a tremendous amount of opportunity out there. He says the Dot is an amazing technology that can do everything Sonos can do. Dealers, he said, ought to look at this as an opportunity. 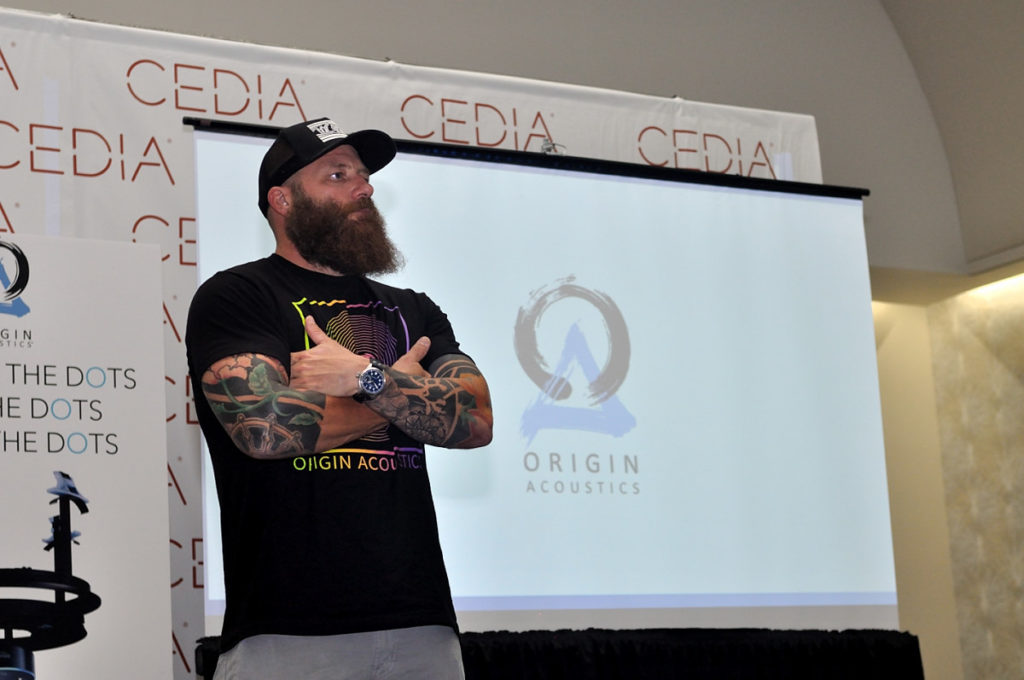 “Luxury goods are going to be here, we’re going to have a market for CEDIA for a long time,” Burkhardt proclaimed. “And all the people that I care about, all my dealers, and all of our friends – they’re going to stay in business. And they can have their small two-three-four million dollar-a-year companies doing this. But if we look at how much the industry is going to change over the next few years, why wouldn’t we try to as an industry to latch on to one of the hottest selling consumer products and leverage ourselves with [for example] a multichannel amplifier…”

Origin’s system uses a special version of their speaker mounting bracket to mount a Dot in the ceiling. It is connected to the Valet amp with a RJ45 connector/cable that both provides power to the Dot and transfers the audio back to the amp. The system was designed in conjunction with Joe Whitaker of Thoughtful Home in St. Louis.

Interestingly, Burkhardt predicted that – someday – speakers will have microphones built into them an they will become smart speakers. But that takes a lot of time and a lot of development (and, a lot of dollars). Valet is a quicker, faster…and admittedly, a simpler step.

Learn more about Origin at www.origin.com.