Hear more about this “SuperStorm’s” impact on the region…

During most of the day Monday, we endured harsh bands of dramatic wind gusts and drenching rain. They came in waves and at times, it seemed eerily calm and almost peaceful outdoors. But then over and over…starting slowly and then building up energy, the wind would begin gusting and whipping tree branches and bushes making a loud roaring sound that many described as sounding much like a freight train.

The pace of alternation between the periods of calm followed by breath-taking bursts of wind and rain began to quicken with a noticeable increase in the power of the gusts and its concomitant dispersal of debris flying through the air. All this would ultimately culminate in a dramatic and scary non-stop roar – an almost deafening roar – for an unsettling four…hours…straight. 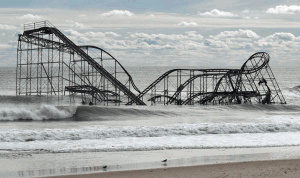 At around 10:00PM that evening, we lost power…plunging us into darkness at the peak of the horrible cacophony. Occasionally we would hear the sounds of debris hitting our house. There was a lot of creaking, cracking, and snapping sounds. You strain to hear clues…clues as to what is happening out there by trying to discern any other sound modulating with the roar. Often, we would hear a faint, then growing, sound of a siren piercing the droning din of the wind as we are situated near a major cross-road.

We were ready for the loss of power, each of us with our own personal flashlight and carefully deployed candles to provide an eerily flickering group of shadows dancing on the walls behind us all. We told stories and jokes to help keep each other calm…then went to bed a little earlier than usual.

After a relatively sleepless night, we awoke to a surprising calm…and lightly falling rain. Amazingly, our power had returned…for which we rejoiced. But cell phones, cable TV, and Internet were all dead. Reverse 911 calls on our still functioning land-line told us that our town was under a declared “state of emergency” and we were not to leave our homes. 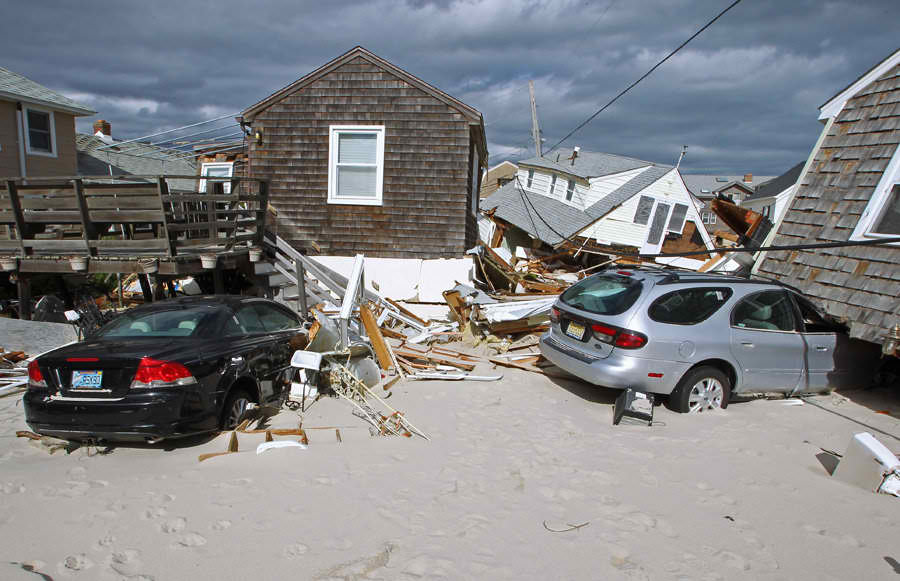 The state of emergency included a travel ban which was designed to leave the roads open for emergency and clean-up crews only. It didn’t matter, our exit was blocked anyway with roads clogged with downed trees and debris…and flooding.

The only source of information we had was the radio…leading to an almost comical scene as though we had been magically transported back to the 1940s with all of us crowded around the radio and listening to the horrible reports of devastation and loss of life around us. The death toll in New Jersey – so far – is twelve people. New York is reporting 38 dead, and Connecticut at least one.

I headed out to take stock of the damage. We were fortunate, only debris and minor damage. But as we walked around our neighborhood to see how our neighbors made out – we were confronted with startling images. The next street over was completely blocked by a downed tree. Next to that…only a few dozen feet away, another tree had fallen on a neighbors car.

And only another few dozen feet away from that (a microburst?), yet another tree had crashed down on another neighbor’s home. These neighbors – who were new to the area – were out in front of their home. They were in shock. We met them for the first time, introduced ourselves, and invited them to our home for warmth (they didn’t have power), offered them coffee (they declined), and offered them the opportunity to charge their cell phones in our outlets (they accepted).

And for the next couple of days, we were all in a bit of a haze. Only by organizing ourselves to begin cleaning up our own neighborhood (who knew how long it would be before the city showed up?) did we “snap out of it” and regain our senses.

No boards to walk on…

The center of the storm hit just north of Atlantic City and only a few miles south of our location. The shore, as you may have heard, took a real beating. Homes were completely destroyed. Others were pushed off their moorings and up against other homes like giant Monopoly game pieces.

The famous Atlantic City boardwalk, only recently repaired after being damaged in last year’s hurricane Irene, was virtually completely destroyed. The famous entertainment piers…ruined, throwing roller coasters, games of chance, and other debris into the ocean.

Disasters like this put things into perspective. You only have to see a photograph from a community a couple of miles away from yours, showing a dead body being carried away in a body bag, to realize that its crazy to worry about deadlines.

Our hearts have been touched by many of you who reached out to us to see if we were doing okay in the wake of this horrible storm. In fact, some of you went to extraordinary means to attempt to contact us…as our normal methods of communication such as email, cell phones, and texts were no longer working.

It means a lot to my family and I that you cared and were concerned. We are all doing fine. There are challenges yet ahead…but it makes it all worthwhile when you have the support of caring friends and acquaintances.

THANK YOU! You guys and gals are AWESOME!!!