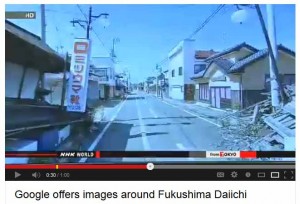 Jiji Press in Japan is reporting that Google has sent its Street View vehicles into at least eight municipalities in the devastated Fukushima District in Northern Japan. The area was devastated in March 2011 as the result of an earthquake and tsunami that fatally damaged The Fukushima Daiichi Nuclear Power Plant’s  reactor causing the greatest nuclear disaster since Chernobyl in Russia.

Google entered the district with the permission of the municipalities and sought to document the remaining amount of devastation in the zone, now more than two years after the natural disaster that brought the country to a standstill. Google vehicles were limited in their area of travel as many roads remain closed. The images were recorded between April and August of this year.

The March 2011 earthquake and tsunami caused business disruption for much of Japan…and certainly for the technology industry as well. Several major companies lost facilities and had to restructure their production networks. It took months for many companies to recover.

Issues with the Daiichi Nuclear Reactor remain. In July, it was revealed that the plant was leading radioactive water into the Pacific ocean. According to a report in Wikipedia, local fisherman had alleged that this was going on for quite some time, but TEPCO, the utility that owns the plant, denied any leakage.

In late August, a separate leak of radioactive water from a containment system at the site was discovered.

As a result, last week the Japanese government took control of all emergency actions to prevent further leaking. The governments action was widely viewed as a lack of confidence in TEPCO. Just yesterday, it was reported that the government may construct an ice wall in an attempt to stop the leakage.

The Fukushima District remains closed due to high levels of radiation.

A Fluke? Or is Housing Making a Comeback? Data released on Friday by the U.S. … END_OF_DOCUMENT_TOKEN_TO_BE_REPLACED