You are here: Home / Asian Connection / Forget Wearables! Japan Invents UnWearables – A Bra That Only Pops Open for True Love 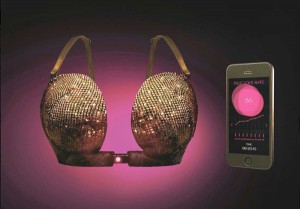 One of the hot topics at the Consumer Electronics Show in Las Vegas earlier this month was “wearables” – technology that you wear somewhere on your body. Whether Google Glass on your head, or a FitBit wrist band, the magic happens when you put it on.

Now out of Japan, we learn of a new technology where the magic happens…when you take it off! Developed by a lingerie company that apparently employs hot-blooded engineers to create cool technology – the True Love Tester is a bra with a latch that will only open if the lady is truly in love.

Is this the Next Big Thing?…You’ve got to see this!…

First, let me assure you that we are NOT making this up! This is a real product as reported by Japan’s Ji-Ji press in its national news column.

Tokyo-based lingerie company Ravijour created the bra as part of a publicity campaign for its 10th anniversary. The True Love Tester is a high-tech bra that has sensors built-in and is linked to a mobile device that analyzes the wearer’s heartbeat – as the news report puts it – “in the heat of the moment.”

The app then determines if the woman’s feelings are “real” and if not, there is no way the young man is getting that bra open. But – if so – the bra will quite literally pop open. As the news report states, this allows “matters between lovers to take their course.”

“We wanted to do something that wouldn’t just appeal to people who wear our products, but also to lift the romantic mood between men and women,” Yuka Tamura, spokesperson for Ravijour told the paper.

And just in case the photos aren’t descriptive enough, the company published a video to show how the system works. Sensors in the bra send a signal (via Bluetooth) to the app running on a smartphone. The app studies the changing patterns of the heart, as well as the duration of the change.

And when the bra detects true love, it doesn’t just unlatch for the lucky young man…it pops open with some force…essentially taking the whole bra off in the process. This is all demonstrated quite convincingly in the company’s published video.

We are including a link to the video here. [Note: NSFW] The video is very kitschy and fairly tame. But we’re marking it NSFW because we’re pretty sure your boss won’t appreciate you watching a video of a bra popping off a drawing…a mannequin…and yes, finally, an actual woman.

It is “a revolutionary bra that knows truly how women feel,” the company’s video says.

Ah, technology…what will they think of next?!?!