You are here: Home / Manufacturers / Blaupunkt, Under New Ownership, is Back in the U.S. with Car Audio & Headphones

<November 30, 2011> Blaupunkt AudioVision GmbH & Co. KG (Blaupunkt) announced earlier this week that it was re-entering the U.S. market with a line of car audio products and – in a bit of a return to its roots – a line of in-ear and over-ear headphones. But what has not been widely reported is that Blaupunkt is also under new ownership, now under the control of German equity group Aurelius AG based in Gruenwald, Germany.

Blaupunkt was well known in the U.S. as a manufacturer of quality car audio products until the company exited the country about two years ago. At that time, the company was owned by Bosch – a global supplier of automotive, industrial, consumer goods, and building technology – who sold off Blaupunkt to Aurelius in a transaction that closed in 2009.

It was once Ideal, but now it’s not…

Founded in 1923, Blaupunkt – known originally as Ideal – manufactured radios and headphones. The company would indicate the best performing headphones by placing a sticker of a blue dot on them. This dot became so popular that the company took the German name Blaupunkt which, when translated to English roughly means blue dot or blue spot.

While these headphones from Blaupunkt are new to the U.S. market, they are already being sold in Europe and the company says the line has been very well received. With a wide range of designs and target markets, the new line spans a price range of $19.99-to-$249.99 MSRP for the U.S. market. 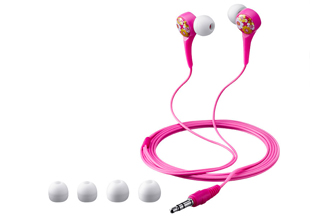 On the entry level, the company offers two “kid’s” in-ear models – the Kids 111 Boys designed for boys and Kids 111 Girls pink-colored model for – appropriately – girls. Included with the earbuds are three different size ear cushions so that the unit can be adjusted to fit any size kid. Perhaps more importantly, the Kids 111 model features a volume limiter so parents can stop worrying about their children damaging their hearing cranking out their favorite Justin Bieber tunes. Kids 111 is available now at a MSRP of $19.99 for either version.

Stepping up from that, we have the Pure 211 – a higher performance model that boasts a frequency response of 20Hz – 20kHz and SPL of 100 dB. Like the Kids 111, the Pure 211 comes with three sets of ear cushions to optimize the fit and better control external noise. The Pure 211 is available now for an MSRP of $59.99.

Up for a little sport?… 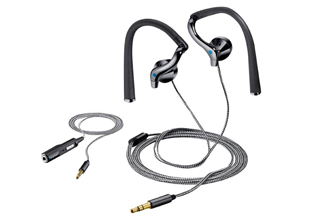 Blaupunkt offers two sport models, the Sport 111 and the Sport 111Talk. With a unique, almost hybrid design, the Sport 111 models include an over the ear clip to help hold the unit in place during aggressive sport, exercise, or outdoor activity. The company also says that the design includes a 3D speaker mechanism that can be rotated in three directions to ensure a comfortable hand-in-glove fit in the ear canal. Unlike sport headphones available from some competitors, Blaupunkt’s models also offer higher performance featuring two discrete drivers in each earpiece for better sound quality and higher sound pressure level capability.

Going over rather than in…

The over-ear models include the DJ 112 Silver Edition which is available in an attractive gun metal gray/silver color. The DJ 112 has a MSRP of $149.99 and is designed for high output and deep bass – perfect for DJ’s and music lovers alike.

Next in the over-ear line is the Comfort 112 Noise Cancelling model. Utilizing a battery-powered active noise-cancelling circuit, this model is perfect for noise free music listening when you’re in a high noise environment such as an airplane, train, or bus. The Comfort 112 has an MSRP of $249.99 and comes with all necessary adaptors and an attractive carrying case. 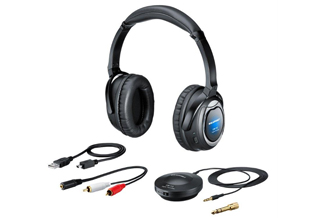 Blaupunkt has turned to U.S.-based 3D Incorporated to assist their re-entry into the market. In an interview with company founder Joe Richter – best known for his long stint at Kenwood – Richter told us that even with the challenging market here in the U.S., the time was right for a new brand of high performance/high value headphones.

“The combination of German engineering, Euro-styling, and value pricing will be tough to beat,” Richter told the BEACON. “In a crowded market like this one, the best performing products tend to be the ones that win the greatest share.”

Richter told us that Aurelius has made many positive changes to Blaupunkt including recapitalizing the company and putting new management in place. He also told us that Blaupunkt has also retained their manufacturing muscle with a facility in Malaysia – and a joint venture factory in China.

However, Richter and 3D Incorporated are heavily involved on the headphone side of Blaupunkt’s business and will be setting up a different network of dealers than the more car audio-centric side of the business. The company has been spending months getting the U.S. structure set up and things are progressing rapidly for a January CES launch.

While the mobile side of the business is looking to set up a network of mobile electronics specialists – Richter told us that they are taking a slightly different approach with the headphone line.

“We’d like to form a partnership with one of the major buying groups,” Richter said. “We think we have a lot to offer.”

For those interested in selling the new Blaupunkt headphone line, contact Joe Richter at (310) 717-7643 or email him at JBR3D604@gmail.com.

For those interested in learning more about Blaupunkt and its products, see: www.blaupunkt.com.