New research results released this week on the smart home market were wildly bullish on the recent impressive growth of the segment, as well as the continuing prospects for growth in the future. The survey, sponsored by PlumChoice, Inc (a technical services provider for IoT and cloud brands) and the Z-Wave Alliance (a consortium of companies promoting Z-Wave wireless technologies), offers a deeper view of the market’s momentum with some surprisingly positive results.

See more from this new research on the smart home market…

The new study, titled 2016: Year of the Smart Device, subtitled IoT Adoption Benchmark Report, was conducted in December 2016 by Matter Communications. A total of 1,000 internet-connected consumers based in the U.S. between the ages of 18 and 65 were questioned about smart home devices and concepts.

The study sought to better understand smart home device ownership, interest in future purchases and perceived device benefits. The survey also looked at purchase drivers and rates of adoption between homeowners and renters, as well as data looking at age, gender and current device owner factors.

The top findings include:

“It’s clear from our data that not only has the smart home arrived, but the benefits of adding connectivity to the things in our home are finally being realized,” said Mitchell Klein, Executive Director of the Z-Wave Alliance. “It’s exciting to finally see consumers understanding the value of connecting multiple devices together and to see categories like smart security, thermostats and safety grow year over year.”

According to a summary of the survey, the “pace of consumer adoption of smart home devices took a quantum leap forward, and the industry is ripe with opportunity.” The study’s writers noted that market researcher IHS Markit said that 80 million smart home devices were delivered globally in 2016.

Fully 97% of consumers say they now what a smart device is, way more than just one year earlier when 67% made that claim. An almost unbelievable 8 out of 10 consumers report owning a smart device (79%). Hot growth areas include appliances, watches and lights. Even smart smoke detectors grew 250% in 2016 versus 2015. 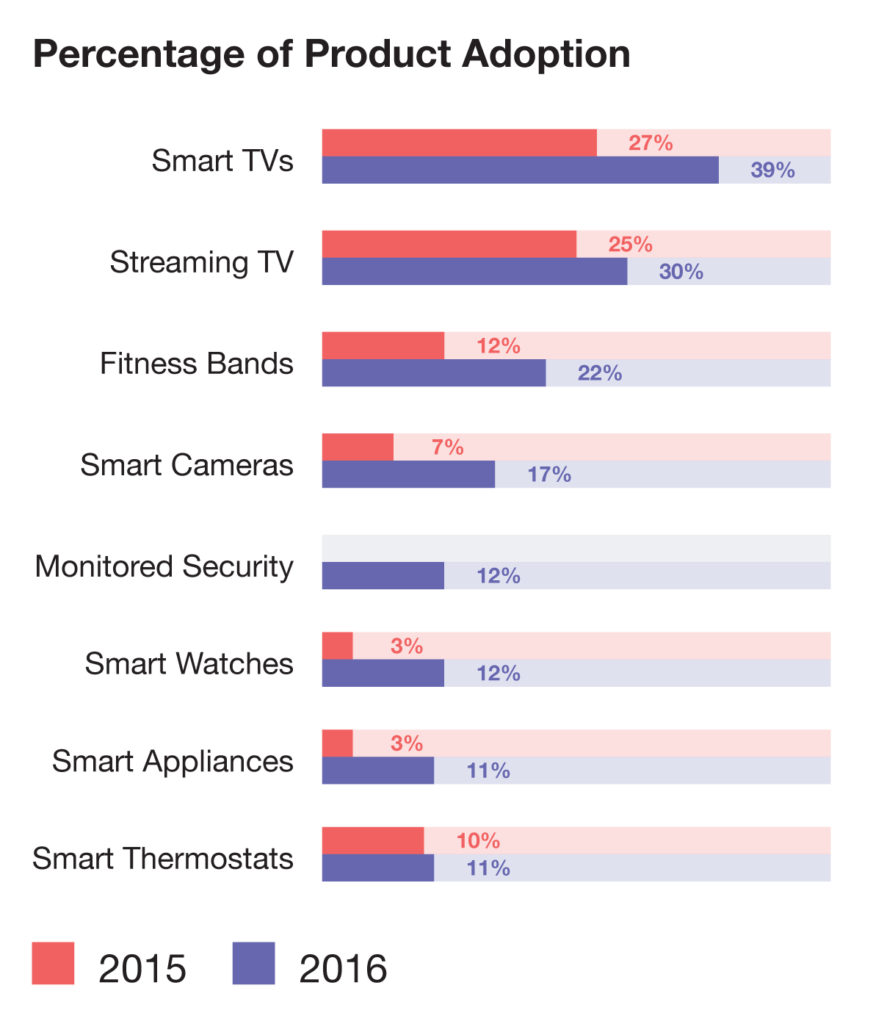 Who is More Invested in Smart Devices? Renters or Homeowners? Surprise!

In a demographic breakdown based on age ranges, we see that smart device adoption varies from a low of 60% in the 55-64 age range to a high of 91% in the 18-24 age range. The study notes that men and younger generations tend to lead the pack in smart home device ownership. However, it goes on to add that women and older generations aren’t that far behind and also showing growth in adoption.

In a bit of a counter-intuitive result, 75% of homeowners report owning a smart device, but fully 86% of renters say that. On the face of it, that may seem like a mistake. But the study suggests that younger generations are adopting smart devices more quickly than older generations, and many of them have yet to buy their first home.

Can You Guess the Most Popular Smart Device?

Perhaps no surprise is when looking at a list of the most popular smart devices [see chart above], “Smart TVs” tops the list – only to be quickly followed by “Streaming TVs.” As the study notes, every individual device category saw growth, but at the low end, “Smart Thermostats” only grew 1% – from 10% in 2015 to 11% in 2016.

When asked to describe the benefits of interconnected smart home devices, we were surprised at how the consumers answered. Fully 71% or more than 7 out of 10, said the main benefit was an “Easier life.” This was followed at number two with “Convenience” as decried by 42% of the respondents. “Entertainment” was tied for third place with “Happiness” by 30% of respondents.

We thought entertainment WAS happiness!

A Fluke? Or is Housing Making a Comeback? Data released on Friday by the U.S. … END_OF_DOCUMENT_TOKEN_TO_BE_REPLACED